Why DLSS on the Switch Pro could be a game-changer 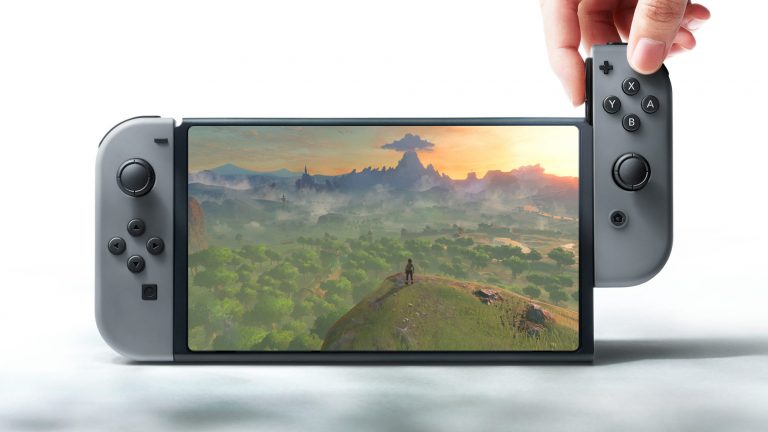 A new report from Bloomberg says Nintendo’s next Switch, or Switch Pro as it’s been dubbed, will house a new Nvidia chip with DLSS capabilities, meaning some games could be played in 4K when docked.

Modern gaming GPUs aren’t efficient enough to drive AAA titles at native 4K on handheld power budgets, so it seemed likely that any 4K-capable hybrid solution would use either DLSS or an approach like checkerboard rendering to hit that resolution target.

Recently, agreeably, Bloomberg ran a story claiming that the new Switch will indeed use DLSS to reach 4K when played in docked mode. Because the feature will require additional code, it may only be supported on new titles going forward, and the report reiterates claims that the upcoming Switch will have a larger display (7 inches, up from the current 6.2 inches). This doesn’t necessarily require a form factor change. Eliminating the bezels from the current Switch would allow Nintendo to increase the screen size up to 7.5 inches, without changing the physical device at all.

DLSS is Nvidia’s deep learning technology for enhancing low-resolution images into high-resolution renders using AI. The technique requires tensor cores, which means a Volta or later GPU, but it offers the potential for much higher resolutions than a device like the Switch can render natively.

Making DLSS a built-in capability of newer titles also allows Nvidia to keep offering support for the mainstream Switch. Both flavors of the platform will target 720p by default in handheld mode, so the only difference between the Switch and Switch Pro would be the latter’s ability to hold a 720p image where the Switch drops below that target to keep its frame rate up. When docked, the standard Switch would raise its clock somewhat and continue to target somewhere between 720p and 1080p, depending on the title. The Switch Pro would have the option to engage DLSS and aim for 4K. In theory, Nintendo and Nvidia could work to enable other resolution targets besides 4K, or to boost the frame rate up to 60fps instead of holding 30fps.

Sony and Microsoft allow game developers to target a mixture of experiences, and gamers can sometimes choose between playing a game at 1080p60 or 4K30, for example. Nintendo hasn’t previously offered this degree of flexibility, but the Switch has been something of a game-changer for the Japanese company.

Nintendo Finally Has a Reason to Chase Cutting-Edge Silicon

Nintendo has never particularly chased silicon specifications. There have been times in the console cycle when the company’s platforms led its competition — the SNES was a better console than the Genesis, despite a lower CPU clock — but the last time Nintendo attempted to position its own platform (mostly) head to head against Sony and Microsoft was 20 years ago, with the GameCube.

The Switch followed Nintendo’s conservative design philosophy by tapping a commodity chip and a known silicon design, but that’s not how mobile device manufacturers maximize performance or battery life. It’s still possible Nintendo would tap a newer bulk Nvidia SoC, but the more I look at the situation, the more likely it seems Nintendo might have paid Nvidia for some custom design work. Company executives have made statements implying Nintendo may have changed its approach to system design:

If Nintendo stuck with an existing Nvidia solution, Xavier NX would be the likely chip of choice. Xavier is huge, though, with a die size of 350mm sq compared with just 118mm sq. for the original Tegra X1 SoC. Its CPU cores are only clocked at 1.2GHz in quad-core mode (when operated in a 10W power envelope) and it’s built on a 12nm FinFET process. Either 7nm or 5nm (7nm being more likely) would be better for power consumption. The GPU is larger (512 cores), but based on the older Volta architecture, not Ampere or Turing.

Paying Nvidia for a custom SoC would give Nintendo the freedom to target the features it wanted for Switch Pro without paying (in $ or die space) for hardware blocks it doesn’t need. Nvidia doesn’t currently manufacture a quad-core Cortex-A78 SoC with 256-512 Ampere GPU cores. Nvidia’s Ampere-equipped Orin SoC won’t hit the market until 2022, and it’s a 750W TDP part intended for vehicles. We’re guessing the Switch Pro probably doesn’t represent a truly radical experiment in die recovery.

Bloomberg reports that the Switch Pro could be priced between $349 and $399 and a price increase makes sense if Nintendo is planning to pay for custom silicon. This could be seen as somewhat in tension with reports Nvidia has ceased production of the current Switch SoC. Nintendo has introduced larger versions of its handheld devices before, but it’s never forced its customers to adopt a more-expensive version of a handheld by phasing out an older model.

“When adapting a new technology, we go to great lengths to ensure we offer new and innovative content that complements it… when we do decide to use an existing technology, we actively pursue collaborations with partner companies that specialize in that technology.”

DLSS could be a truly game-changing technology for the Switch Pro. The current Switch is based on a 7-year-old GPU and an eight-year-old CPU. The Cortex-A57 was never a particularly power-efficient CPU core — it’s the same CPU that powered the Snapdragon 810 — so stepping up to a modern design based on the A76 or A78 would be advantageous for Nintendo. Xavier NX offers 51.2GB/s of memory bandwidth and we can expect any custom silicon to at least match this level, or at least 2x what’s available on the Switch today. If Nintendo had pushed the envelope back in 2017, the gap between the Switch and Switch Pro would be smaller, but Nintendo relied on commodity hardware when it built the handheld in the first place, which means a jump to either the leading edge or n-1 would deliver a proportionally larger boost.

A custom, Ampere-based Switch Pro ought to be able to offer a rock-solid 30 or 60fps in 720p mode, while a DLSS-powered 4K mode worth playing seems plausible, given the combined gains in memory bandwidth efficiency and raw memory bandwidth. Nintendo would almost certainly follow in the footsteps of Sony and Microsoft in requiring that Switch games work well on both Switch and Switch Pro, to avoid alienating customers.

Nintendo doesn’t try to compete head-to-head with Sony and Microsoft the way it used to, but it still pays close attention to how its products are positioned in-market against the other firms. Adding 4K capabilities to the Switch allows Nintendo’s handheld to claim the same render target as the far larger consoles, delivered in a fraction of the power. Nintendo cannot build a Switch Pro that competes with the PS5 or Xbox Series S|X on raw power, but the combination of cutting-edge manufacturing, updated hardware architectures, and AI could shrink the gap between the current Switch and other consoles significantly. This time around, Nintendo may feel the gains are worth the cost.