Unreal Engine was announced on Aug 19 that it released Unreal Engine 4.27! This release introduces powerful new features for creators across game development, film and television, architecture, automotive, and beyond. Highlights include major updates to the in-camera visual effects toolset for virtual production, enhancements to GPU Lightmass for significantly faster light baking, integration of the Oodle Compression Suite and Bink Video codecs for free use in Unreal Engine, production-ready Pixel Streaming, production-ready OpenXR support, Datasmith upgrades, and much more. 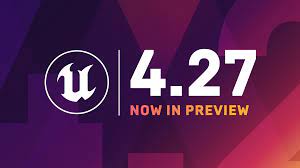 This release introduces a slew of improvements to the efficiency, quality, and ease of use of Unreal Engine’s in-camera visual effects (ICVFX) toolset一making it faster and easier than ever to utilize this revolutionary virtual production technique that is changing the face of filmmaking.

The Path Tracer is a DXR-accelerated, physically accurate progressive rendering mode in Unreal Engine that can be enabled without requiring any additional setup. In 4.27, a range of improvements make the Path Tracer viable for creating final-pixel imagery comparable to offline renderings—with features such as physically correct and compromise-free global illumination, physically correct refractions, feature-complete materials within reflections and refractions, and super-sampled anti‑aliasing.

With RAD Game Tools becoming part of the Epic Games family, the Oodle Compression Suite and Bink Video codec are now built into Unreal Engine, putting some of the fastest and most popular compression and encoding tools in the industry into the hands of Unreal Engine developers for free.

Pixel Streaming is now production-ready, with a host of quality improvements and an upgraded version of WebRTC. This powerful technology enables Unreal Engine and applications built on it to run on a high-powered cloud virtual machine, delivering the full-quality experience to end users anywhere on a normal web browser on any device. In this 4.27 release, we’ve also added support for Linux and the ability to run Pixel Streaming from a container environment.

This release furthers our goal of having Unreal Engine connect as seamlessly as possible to additional tools, with enhanced support for USD and Alembic. With 4.27, users can export many more elements to USD—including Levels, Sublevels, Landscape, Foliage, and animation sequences—and import materials as MDL nodes. Users can now also edit USD attributes from the USD Stage Editor, including through Multi-User Editing. In addition, it’s now possible to bind hair and fur Grooms to GeometryCache data imported from Alembic.

With Unreal Engine 4.27, it’s easier than ever to create XR content in Unreal Engine, with production-ready support for the OpenXR framework. Our OpenXR plugin, which enables users to target multiple XR devices with the same API, now also offers support for additional features—including Stereo Layers, Splash Screens, querying Playspace bounds, and motion controller visualization—and for extension plugins from the Marketplace, enabling you to add functionality to OpenXR without relying on engine releases.

For more information about UE 4.27, please visit the release notes to see the full list of features and improvements: