Could you tell us a bit about Axis Studios’ history?

SD:Axis Studios is an award-winning entertainment company, founded in Glasgow in 2000 by CEO Richard Scott, in partnership with Dana Dorian, Stuart Aitken and Graham McKenna. Since its inception it’s grown substantially, tripling its turnover to £15m between 2015 and 2018 and continuing to expand. Axis started as a gaming animation company, producing many award-winning trailers such as the much-vaunted trailer for Dead Island, which won a BAFTA, Cannes Lions, The International Andy Award and many more. It boasts an international team of directors, designers, artists, animators, writers and producers, working across three studios, Glasgow, Bristol and London. As well as being the largest animation studio in Scotland it also has one of the largest CGI teams in the UK. How did you get the job as Creative Head of Development and what does it involve?

SD:I’ve worked in animation for almost 15 years in various creative roles, from story-boarding to direction. After art directing Lost in Oz, which involved designing a complete world from scratch, I was looking for a similar challenge – I wanted to build everything about a story from the ground up, rather than play in someone else’s universe. Around that time, Axis were looking to expand into the world of original IP, so I took on the job of kick-starting the development department and leading it creatively. The job involves sourcing books, graphic novels and original ideas that are a good fit for the company and shepherding them to the screen – and that involves lots of reading, writing and drawing, which I love! It’s also about keeping your eyes and ears open for people around the studio who have great ideas, then helping them develop those ideas further.

To have been working in animation for almost 15 years sounds like quite a career – what attracted you to working in the animation industry?

SD：I’d wanted to be an animator since I was around eight. A distant cousin of mine in Canada was an animator on a Saturday morning show called “The Racoons” and he sent me an animation cel one day, by air mail… I just couldn’t believe that this was something people would actually do as a job. I spent my childhood learning as much as I could about the process and became obsessed with one day being part of it. I was always drawing, as a kid. I remember one time, I was taking a Maths test in primary school and I drew the number of cakes instead of actually writing the answer. I failed the test, but those were some detailed cakes! I love my job because it gives me the chance to tell stories, and for the first time in Axis’ history we’re now telling our own stories. 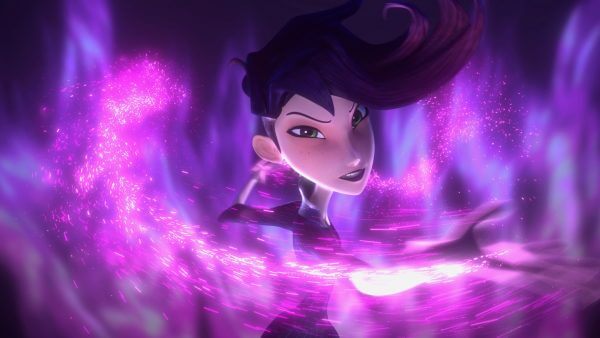 Is there a project are you most proud of having worked on?

SD： Lost In Oz, the Amazon Studios show. The writers/producers (Bureau of Magic) had some initial thoughts on what the world and characters would look like, but nothing set in stone. So, I took the freedom those guys gave me and ran with it. It was the first chance I had to design and art direct an entire world, from broad strokes about how living in the world made the characters feel, right down to what lampposts looked like. I even got to design weather systems and do city planning. It was pure creativity from start to finish and a genuine joy to be part of.

What goes into your process when creating projects from scratch?

SD： For creative direction, I tend to pull together references or rough sketches and quickly create a mood board for the whole team. Even though most of what I do now involves original IP, it’s always a collaboration, so mood boards help everyone involved quickly focus in on what we want the world to look like. From there, it’s a case of briefing artists and feeding back on their work until we arrive at the finished product. When I’m writing for a project, I start by writing the story out on index cards, then shuffling, cutting and refining until I have something that works. In both cases, it’s about finding your way to the heart of the story and character as quickly as you can. Is there anything you can tell us about what Axis is working on at the moment/has in store for the future?

SD：Axis Studios is currently working on developing its own IP and creating ground-breaking animation and VFX content for some of the biggest names in video games, television, film, on-line, theme parks and more including, the ‘Helping Hand’ episode of Netflix’s ‘Love, Death and Robots’, and the SyFy series ‘Happy!’.

And finally – what advice would you give to someone hoping to pursue a similar career in the animation sector?

SD：It’s not always easy to get your start in animation. It takes lots of dedication and late nights to begin with. Unless you luck out and get a job straight away, there may be periods where work is scarce. Then, you have to be your own motivator to keep applying for things, trying new techniques, scouting for jobs and networking. In the long run it’s worth it… there aren’t many jobs where you can be builder of your own universe!

Thank you for your time Stephen!

Axis’ recent awards include: 3 Daytime Emmy’s and an Annie award for Lost in Oz S1, AEFA awards (special merit) for Happy, A Bifa award for Earlyman, and an RTS craft award for KMF.