Smartphones remain the most popular gaming platform among Germans

Berlin, 25 June 2020 – Smartphones remain the most popular gaming platform among Germans. Puzzles, brain-teasers or building games: 19.5 million people in Germany use smartphones to play games. That’s 900,000 more gamers than in 2018. These are the figures released today by game – the German Games Industry Association, based on data collected by the market research company GfK. This means smartphones are now Germany’s most popular gaming platform by an even wider margin; they hit the top spot for the first time in 2018. The number of PC users increased as well: in 2019, around 16.3 million people played on computers, which is an increase of 2.9 million gamers compared to 2018. Reasons for this growth include the release of hotly anticipated games such as city-building strategy game ‘Anno 1800’ or the western epic ‘Red Dead Redemption 2’, as well as the launch of new subscription services such as the Xbox Game Pass for PC or Ubisoft’s Uplay+.

By contrast, fewer people used consoles such as the Nintendo Switch, the Sony PlayStation, or the Microsoft Xbox to dive into the digital world in 2019. Approximately 15.9 million people played console games in 2019 – around 800,000 fewer gamers than in the previous year. However, the planned launches of the follow-up consoles to Sony’s PlayStation 4 and Microsoft’s Xbox One at the end of the year are expected to breathe new life into the console sector. As game announced in March, one third of Germans are greatly looking forward to the release of the coming generation of consoles. Tablets, on the other hand, gained approximately 300,000 additional users in 2019, amounting to a total of 11.3 million gamers. Overall, more than 34 million Germans play computer and video games. The average age is 37.5 years.

Felix Falk, Managing Director of game, says: ‘At home or on the go, alone or with friends: Germans play games all the time and everywhere. At times like these, in particular, we can see why so many people in Germany love games: they’re fun, they bring people together, and they allow us to escape for a little while, even when we’re sitting at home.’ 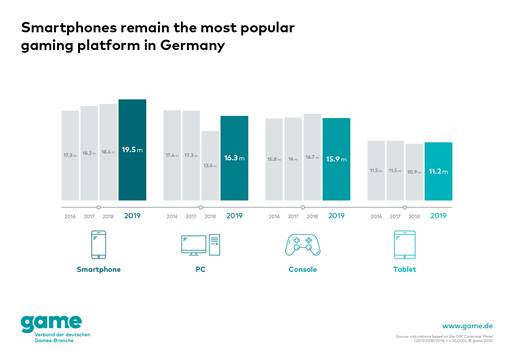 As already reported by game, the German games market grew by 6 per cent in 2019, to around 6.2 billion euros. Sales of games hardware, including consoles, gaming PCs and accessories, dropped by 2 per cent from the previous year, to 2.4 billion euros. In contrast, the market for games software showed a gain of 11 per cent: in 2019, a total of about 3.9 billion euros was spent on computer and video games and the charges for the respective online services.

The current data take into account further dedicated games hardware like gaming PCs and the corresponding accessories, resulting in a larger market size than previously reported. This is true also of the adjusted data for 2018, which accordingly differs from that reported last year.

The market data is based on statistics compiled by the GfK Consumer Panel and App Annie. The methods used by GfK to collect data on Germany’s digital games market are unique in terms of both their quality and their global use. They include an ongoing survey of 25,000 consumers who are representative of the German population as a whole regarding their digital game purchasing and usage habits, as well as a retail panel. The data collection methods provide a unique insight into the German market for computer and video games.