Next Limit has released Maxwell 5.0, the next major update to its physically based spectral renderer, adding multi-GPU support, integrated cloud rendering, and a V-Ray scene importer.

The release is the first significant update to Maxwell in some time: Maxwell 4.0 came out in 2016, and the last bugfix update was over 18 months ago.

A performance-focused update, for both preview and final-quality rendering

Performance is a key focus of the update, with speed increases in both preview and final-quality rendering.

The video at the top of the story shows the GPU version of Fire being used to preview a scene with over 3 million triangles, although there’s no information about which graphics card is being used. 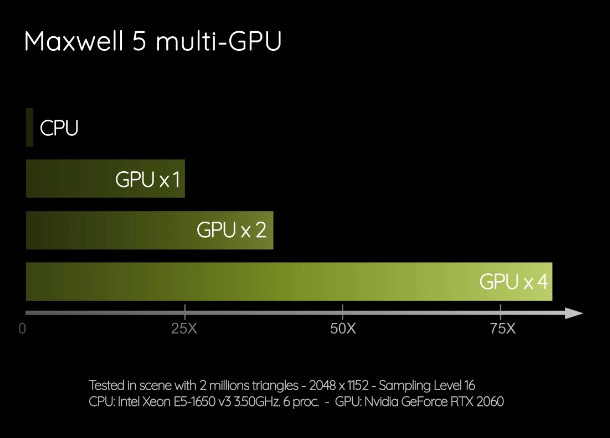 The benchmark on the product website, reproduced above, suggests that you’d need to be using at least three GPUs to see that kind of speed boost, but that performance scaling is relatively close to linear.

Maxwell GPU can also now handle additive materials, although there are still a number of Maxwell features that the engine doesn’t support, including procedural textures, coatings and SSS.

Other changes include the option to group lights and treat them as a single emitter in Multilight, Maxwell’s toolset for adjusting the colour and intensity of light sources in an image after rendering.

The interface has also been reworked to display better on modern high-resolution displays “4K or higher”.

Workflow improvements include support for nested references, making it easier to work with complex scenes; and the option to search for scene dependencies in file paths with up to three levels of subfolders.

Users of the standalone edition of the renderer, Maxwell Studio, also get built-in access to a new cloud rendering service, Maxwell Cloud.

As with Chaos Cloud, the equivalent feature in V-Ray, sending a render to the cloud is a one-click operation, although currently, you can only render using the CPU engine.

At the time of posting, Maxwell Cloud instances are 96-core Intel Xeon machines with 86.4GB of RAM.

To use the service, you need to buy credits online in advance, which entitle you to rent individual machines by the hour, with prices starting at €40 (around $44) for 10 machine-hours of rendering.

The Studio edition also includes a V-Ray scene importer, which automatically converts V-Ray materials and lights into their Maxwell equivalents for rendering.

Similar importers are “coming soon” in the application-specific versions of Maxwell. Other changes include support for coated materials and “much better support” for transparent materials in Maxwell GPU; and new versions of Benchwell, Maxwell’s benchmarking tool, for both CPU and GPU.

Maxwell Studio 5.1 is available for Windows 7+ and Windows Server 2008+, Linux and macOS 10.11+. Maxwell GPU is CUDA-based, so it requires a Nvidia GPU. See detailed specs and a list of supported GPUs here.

New perpetual licences of Maxwell Studio and the integrated editions are now priced identically, at $595 for a node-locked licence or $795 for a floating licence. Prices include one additional render node.

Multilight is a free download for Windows, Linux and macOS.