Annecy, the Land of Creation In April 2022, the Annecy Festival Residency, dedicated to animated feature films, will host 3 new project leaders who will each develop their graphic universes and profit from being in a working environment conducive to exploration (at the Papeteries – Image Factory), as well as having a designated mentor and assistance from the CITIA teams.

“The many forms in animation film are a reality and their richness hails from this diversity. The freedom to break barriers: of time, place, space, aesthetics or writing, authors can use their films as a genuine experimental field and visually translate the power of their words.

This Annecy Festival Residency’s 2nd edition will challenge them to explore, test, observe, listen, and share, with the unique aspiration to expand their creativity.”

30 projects were received during the summer, 11 of which were led by women, 3 eclectic projects were chosen, 4 artists, 3 months of intensive work and the pride of being alongside these creators, to contribute to these projects’ progression, to support the animation feature film industry and to stimulate this limitless creation throughout the territory!

During the residency, Ismaël will begin a series of tests to define the aesthetic outline of the film’s virtual universe. This environment is a metaverse – an online 3D environment – where the film’s characters in the form of avatars interact as if in real life. The sets evolve according to the storytelling, navigating between two poles, one focused on hyperrealism, the other focused on a more abstract representation, which embodies the character’s inner reality more. For these tests he will use 3D scanning tools, real-time video game engines, video texturing (CEF3D) and Gan algorithms.

Dino Doom on Desert Planet is an unlikely love story between a humanoid slave, Azaz, and a young meteor, NIKU-278.

Dino Doom on Desert Planet, like any proper science fiction work, is a re-interpretation and prognosis of the current global, historical environment. The ecological crisis, mass migration, terrorism, bi-polar political power-plays, free speech and propaganda, class struggles, and lastly, the possibility of love and humanity in a time of crisis – all these phenomena serve as the basis of the story’s creation.

During the Annecy residency, Zsuzsanna and Balázs will start storyboarding the film and at the same time further develop the visual style.

The film will have 3 different settings – space, the Urth and the dreamworld. Also, research and experiments with colours, outlines and textures will be explored. 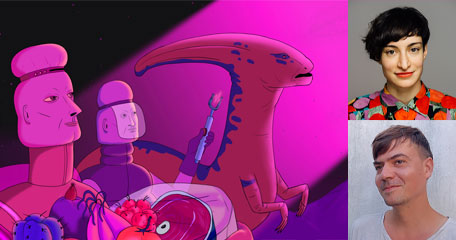 The project has two general aims: the editorial and visual development. Both need to be advanced simultaneously. The scriptwriting needs to be grounded in the storyboard, to visually see the whole story in order to optimise it, in other words, to eliminate the inessential, and also accentuate and attenuate elements of the subplots. The main aim will be to produce a first animatic cut of the film, with as much input as possible from the visual development, sound, and music references. The main aim for the visual development is to work on an overall visual concept of the film. To establish the guidelines and foundations of the film and each character, setting, and prop, by creating collage mood boards.

“The 1st edition of the Annecy Festival Residency enabled us to confirm and measure the importance of being able to have “time” in the creative process. This precious time, which provides the chance to develop, question, share, and more than anything to explore, to make a promise blossom and unravel it. In other words, this residency aims to nurture talents and works in the making.

The 3 projects selected are diverse in their styles, techniques, and messages that they convey, but collectively they each have a strong message, a unique story, and significant resonance with today’s world.

We are convinced by this choice that this 3-month “happy cohabitation” in Annecy will stimulate the artists’ creativity and encourage them to delve as deep as possible into their research before delivering their first animation feature films.”

Between April and June 2021, CITIA hosted the first edition of the Annecy Festival Residency with 3 projects: Piece (Alan Holly, Ireland), Heirloom (Upamanyu Bhattacharyya, India) and Le Cœur à danser (Pierre Le Couviour and Amine El Ouarti, France). During a difficult health context, the Residency was held in Annecy, inside the Papeteries – Image Factory, and the mentoring led the authors step-by-step towards a unique graphic identity. Showcased at the Mifa as a Pitch, each worked hard to promote their film to be able to meet the necessary partners to continue their projects.

The adventure doesn’t stop here, the CITIA teams follow each of the projects to ensure their progression, aid networking and to react if a new promotional opportunity arises through our other support schemes.