ANIMATION UK AND CMC HELP INDUSTRY ‘BE READY FOR BREXIT’

*At the time of this event (24/10/19), the UK Government was undergoing planning of a UK departure from the EU on the 31st of October. This has since changed, therefore so has some of this information. 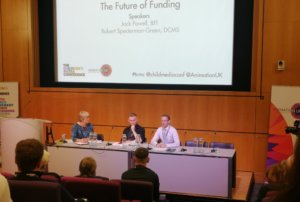 Last week on the 24th of October Animation UK in partnership with the Children’s Media Conference (CMC) ran a ‘Be Ready for Brexit’ event at The Wellcome Trust in London, funded by the government’s Business Readiness Fund. The event, free for attendees and tailored for animation and kids’ content TV/digital production communities, distributors and media freelancers, was an opportunity for a range of industry experts to present invaluable information on how the sector can prepare for various Brexit outcomes.

The first session ‘The Future of Funding’ focused on covering how to access funds and EU markets and exploring the continuation of/replacements for the Creative Europe Media grant. Discussing what would happen in the event of a Brexit deal, Jack Powell, Senior Policy Analyst at the BFI advised that “there is an option of [UK applicants] agreeing to participate in the Creative Europe Media funding after 2020 until 2027 – that programme is undergoing design now”.

Director of the DCMS Robert Specterman-Green assured that “with the current deal, nothing would change – UK projects remain eligible for EU funding and bidding up until the end of 2020. After 2020 there are greater degrees of uncertainty. Government wants feedback & input from industry on what aspects of The Creative Europe Media fund are most beneficial, to see if it can be replicated in case it has to be substituted in future. The Young Audiences Contestable Fund is not successor to it, as is its own separate viable entity”.

The second session ‘The Future of Finance’ explored Brexit implications trade treaties, sources and support of co-finance and tax incentives, and how treaty-based co-production can continue or potentially grow. On the panel was Alison Warner, Managing Director of Blue Zoo Rights, alongside Liz Brion (Head of Media Tax, Grant Thornton), and Huw Walters (Director, Industry Media) who all ventured their thoughts on the subject.

“The UK tax credit is enshrined in UK tax legislation, and there isn’t going to be a change of that. The government are committed to continuing their support of the creative industries.”–Liz Brion, Head of Media Tax, Grant Thornton 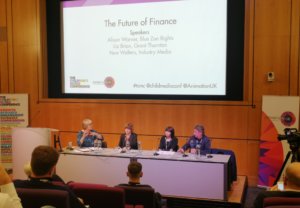 “Producers out of EU Canada and Australia continue to find that the UK is a creative hub with brilliant writing, animation and broadcasting – the desire to work together is still strong.”  —Alison Warner Managing Director, Blue Zoo Rights

“The main implication for producers in UK countries would be if UK productions were no longer classified as ‘European works’, however the European Convention on Transfrontier Television (ECTT) – which the UK is party to – ensures that this won’t happen.” –Huw Walters, Director, Industry Media

The next session ‘Export and Import Issues’ followed the new arrangements for sales and licensing activity to territories in the EU, “country of origin rules”; tax revenue from outside the UK, data issues, trademarking, and international royalties. Its panel featured Genevieve Dexter (Founder & CEO, Serious Lunch Distribution & Eye Present Productions), Liz Brion, Éamon Chawke (Partner, Briffa) and Michael Stretton, Royalties Controller from C.C. Young and co. One of the key areas for concern, the panel agreed, is data transfers between the UK/EU.

“There is a gap of understanding on the timescale on additional restrictions and safeguards. Look at your contracts that facilitate the flow of data from the EU to UK, as this all may not be in your initial contracts. If your business operates internationally, and you have collected data from outside the UK – e.g. EU employees, permanent staff and freelancers – but stored it in the UK, changes in data control will apply to you, and your GDPR standard contractual clauses in contracts regardless of deal or no-deal.”—Éamon Chawke, Partner, Briffa 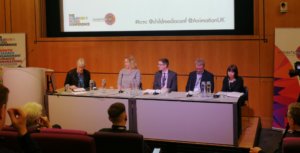 The fourth and final panel session, ‘Workforce, Skills and Employment’, looked at processes facing workers registering under the Settled Status scheme, visa implications for shooting in Europe, potential changes to workers status and rights, transitional arrangements, and the future plans for points-based immigration.

“A points-based system would value qualities other than salary, such as skills, and education – however you would need people constructing the system with knowledge of the niche qualities and culture of animation as a creative sector”—Hari Prabu, Policy Officer, Creative Industries Federation

“The European Temporary Leave to Remain visa will become operational on the 1st of November should we leave without a deal. It will be similar in terms of the application process to the EU settlement scheme. Available to apply online, it is be free, not employer-sponsored, and only for EU citizens who want to come to the UK after the 31st of October and stay after Dec 2020. It will last for 36 months from the point of application. This will link in to the new immigration system, which will start to kick in in January 2021.”–Blanca Grey, Policy Engagement Lead, Home Office

“The Government says that after 31 Oct Brexit, freedom of movement in its current form will end. However, between then and the end of Dec 2020, EU citizens will retain the same rights.”Jack Powell, Senior Policy Analyst, BFI

Victoria Burnip advised that EU workers in the UK should apply for pre-settled or settled-status, regardless of a deal or no deal Brexit outcome: “It isn’t citizenship, but it confirms the right to live in the UK, use the NHS, stay in the UK for as long as you like, or move abroad and live for up to 5 years retaining your status (in the case of settled-status). This is now free of charge, and applications have had a high success rate.”

For those who were not able to attend, the event was live-tweeted, and videos of the panel sessions are available to view here on our website, for you to watch at your convenience

If you/your company are a member of UK Screen Alliance or Animation UK and would like to flag up any questions, contact us and we can update you on what may effect you directly.