Add-in board unit sales continue to slide in Q3

Add-in board unit sales continue to slide in Q3, seeing first year-over-year decline since the pandemic

Quarter-to-quarter graphics add-in board shipments decreased significantly by -33.5% and decreased by -31.9% year to year.

According to a new research report from the analyst firm Jon Peddie Research, unit shipments in the add-in board (AIB) market decreased in Q3’22 by -33.5% from last quarter and decreased by -31.9% year to year. Meanwhile, Nvidia increased its market share by 7% during the third quarter.

Over $3.7 billion AIBs shipped in the quarter, which represents a decrease of $1.8 billion from Q2’22; this is primarily due to falling ASPs. The AIB market reached $31,776 billion during the last four quarters. We forecast it to be $39 billion by 2026. Intel’s entry into the market, due to the strength of its brand and position with OEMs, will create an increase in unit shipments and the total available market beginning in the second half of 2023. 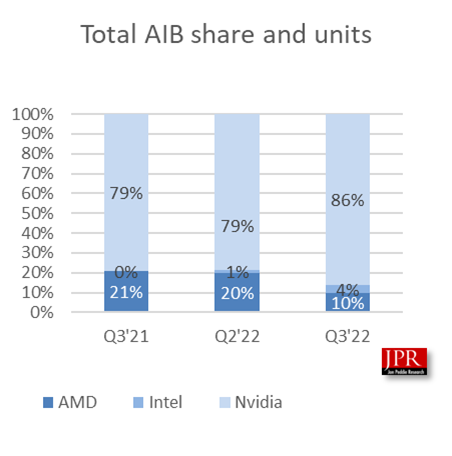 Market share changes quarter to quarter and year to year.

Add-in boards use discrete GPUs (dGPUs) with dedicated memory. Desktop PCs, workstations, servers, render farms, mining farms, and scientific instruments use AIBs. Consumers and enterprises buy AIBs from resellers or OEMs. They can be part of a new system or installed as an upgrade to an existing system. Systems with AIBs represent the higher end of the graphics industry. Entry-level systems use integrated GPUs (iGPUs) in CPUs that share slower system memory.

The add-in board markets continue to experience the correction that began in the first half of 2022. Prior to Q2’22, the AIB market had shown double-digit growth year over year for the previous four quarters, an unsustainable rate driven by the pandemic, lockdowns, and more people upgrading PCs as working from home became a necessity. The downturn should continue in Q4; however, ASP will begin to stabilize as AMD and Nvidia introduce next-generation graphics processors during November and December.

JPR found that AIB shipments during the quarter decreased from the last quarter by -33.5%, which is far below the 10-year average of a 17.1% gain.

Total AIB shipments decreased by -31.9% this quarter from last year to 6.9 million units and were down from 10.35 million units last quarter.

Dr. Jon Peddie, president of JPR, noted, “The pullback in spending on PCs and AIBs has been expected, and we warned about it a year ago. But, disruptions in the supply chain and the time needed to make corrections in the overly enthusiastic production commitments left most suppliers with more inventory than anticipated. Most companies began hiring freezes, and others either executed layoff plans or established them. It’s difficult to call the future when components are acting erratically. Still, there was a serious loss of common sense and historical perspective exhibited by many suppliers that have come home to roost. We see a slow growth ahead, but growth nonetheless.”

JPR has been tracking AIB shipments quarterly since 1987—the volume of those boards peaked in 1998, reaching 116 million units. In 2020, 42 million shipped. 30.5 million units have shipped through three quarters in 2022.

Jon Peddie Research has been active in the graphics and multimedia fields for more than 30 years. JPR is a technically oriented multimedia and graphics research and consulting firm. Based in Tiburon, California, JPR provides consulting, research, and other specialized services to technology companies in a variety of fields including, graphics development, multimedia for professional applications and consumer electronics, high-end computing, and Internet-access product development. JPR’s Market Watch is a quarterly report focused on PC graphics controllers’ market activity for notebook and desktop computing.