The Man Behind ‘I Am A Man,’ a VR Experience That Chronicles the Fight for Civil Rights At SIGGRAPH 2018, Derek Ham shared his VR project “I Am A Man” in the Immersive Pavilion’s Vrcade. This captivating experience immerses users in the middle of the historic events of the African-American Civil Rights Movement, including those leading up to the assassination of Dr. Martin Luther King Jr. As we close out February, and the Black History Month celebrations it encompasses, we got a chance to talk with Derek and find out more about the making of “I Am A Man,” his career to date, and what he’s looking to do next. If you have a VR experience of your own, don’t forget to submit to the call for submissions for SIGGRAPH 2019’s Virtual, Mixed and Augmented Reality or VR Theater through Tuesday, 26 March.

SIGGRAPH: How did you go about creating the “I Am A Man” VR Experience?

DH: I approach all design, even designing for VR, computationally. This is to say I break things down into a series of variables, rules, and schemas. Doing this for VR storytelling was somewhat of a challenge for me. I try not to be one of those academics that separates themselves from professional practice and real-world case studies. I teach my students about design computation and the affordances of thinking through design problems this way, and I didn’t want to cave under the pressure of my own professional work.

One of the first things I did after completing my script was run the entire script through a model that mapped the scene with the spatial quality and the targeted emotion. This was my “schema” that allowed me to develop a project with experiential diversity. Below is an example of this system.

I have a background in architecture, finishing Harvard [University]’s Graduate School of Design in 2003 with a master’s in architecture, after which I practiced and taught for some time before pursuing my Ph.D. I completed my Ph.D. in design computation at MIT, finishing in 2005 right before I was hired at NC State [University]’s College of Design. In building “I Am A Man,” I put to practice both my architectural experience as well as a theoretical approach to design and computation in order to develop a methodology for VR storytelling. This was part of the attraction to working on the project in the first place. Years ago, I wrote a paper on a concept I called,“Regulating Spatial Entropy in Architecture Design.” The concept of spatial entropy is that there is a measure of “difference” and “sameness” that concurrent spaces have in buildings and urban environments. The same can be said about VR environments. Too much radical change in a VR space can leave the user confused. At the same time, without adding variety, we might lose the visitor to boredom. These were some of the building blocks behind creating “I Am A Man.”

SIGGRAPH: What inspired the project?

DH: The year 2018 was very special, and was, in many ways, fortuitous for this project: 4 April 2018 marked the 50th anniversary of the assassination of Dr. Martin Luther King Jr., as well as the events surrounding his death (which included the Memphis Sanitation Workers’ Strike). So there was a great opportunity here to tell this story, and use VR to bring this part of history into the 21st century.

At the same time, from the very beginning, I was thinking broadly about the role of narrative and storytelling in VR. What makes it special? What can we do in this medium that has not already been done in films and traditional video games?  Additionally, I was curious to know where the line existed between calling something a ”documentary” versus calling it a “historical narrative.” I like to think that “I Am A Man” lies somewhere in the grey space between these definitive forms of media. There are moments where the user is presented with real historical photos, and spaces recreated to exact historical architectural accuracy, like the Lorraine Motel. Then, there are other scenes in which creative liberty was taken to create spaces that captured the culture and time of Memphis in 1968. This type of endeavor has no textbook or prescribed methodology, so for me it was very exciting. 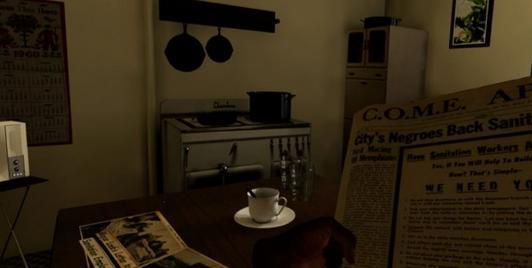 SIGGRAPH: Let’s get technical. What was it like to create this experience in terms of research, software, etc.?

DH: Visiting Memphis in the process of creating this piece was a very pivotal experience for me. It is one thing to research film and photos of events, but there is something about “breathing the same air” of the historical space you are researching that brings things to life. Additionally, I was fortunate enough to work with the National Civil Rights Museum in Memphis, TN, which has preserved parts of the Lorraine Motel, including the actual room where Dr. Martin Luther King Jr. stayed the night before he was assassinated. Seeing the balcony on which he stood, and walking the ground where he walked, presented me with insight on how to use VR to pull users in.

This is where I first had the idea to use light and the setting sun to set up the eerie, tension-filled moments before Dr. King’s assassination. If you visit the Lorraine Motel today, you can see not only the balcony where Dr. King was killed, but also the museum across the street, which has preserved the room in the apartment where the assassin pulled the trigger. In the VR project, I position the user in a spot that stands almost in the middle of these two spaces. As you look towards where the killer would have been the setting, sun shines directly into your eyes to present a moment of tension and strange beauty of light, which is tragically disrupted by the gunshot.

Programming the experience on the Unreal Game Engine presented a lot of affordances to achieve visual techniques like this. I was surprised that the light is refracted through the VR hands with a soft light bloom and god-rays that spill through the fingers in real time as you place your hands in the sky to cover the sun. Additionally, visual effects like animated photo realistic fire are easy feats through in Unreal.

The other major component of the project had to deal with agency and the amount of control I wanted to give the user to interact with the environment. One of the things that is most striking about this piece is the use of “black hands” throughout the entire experience. For many users, looking down and seeing their hands as the hands of an African American man is very jarring. Oculus Touch Controllersgave me a lot of flexibility in this space, and I definitely could not have told the story this way without them. While I’ve tried many VR controller devices, I have to say that the Touch Controllers (to date) have the smallest form-fitting profile. When I tested “I Am A Man” on the HTC Vive, I looked down and saw hands, but I still felt as if I was holding controllers. This is not the case with the devices Oculus has developed, and many who tested “I Am A Man” would agree. The Touch Controllers almost disappear as your hands take center stage, and that’s exactly what I wanted to happen with this experience. 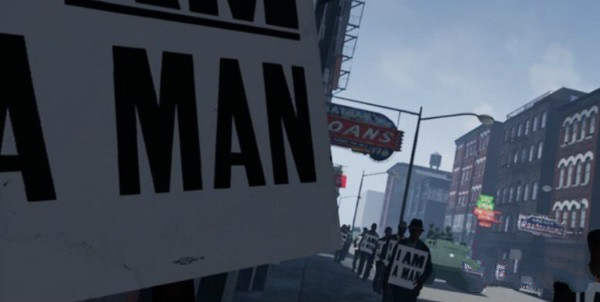 SIGGRAPH: By the time you showed “I Am A Man” in the SIGGRAPH 2018 Immersive Pavilion, you had already won funding through Oculus Launch Pad and been awarded prizes from a handful of film festivals. Can you share a little bit about the experience you’ve had sharing the experience around the world?

DH: I’ve been fortunate to receive a lot of warm reviews for “I Am A Man.” To date it has traveled to several film festivals and won several awards, including: 2018 AT&T Film Award for “Best VR/AR/MR”, the 2018 Future of Storytelling “Bridging the Divide” Prize, the 2018 Cleveland Film Festival “Perspectives Award” for Immersive Storytelling, and the was a VR category winner at the Nashville Film Festival. All of this, of course, would not have been possible without the initial award from Oculus Launch Pad in 2017. The Launch Pad program supports and offers aid to creators with diverse backgrounds to bring their VR projects to market.

Oculus was kind enough to give me a showcase space at its annual developer conference in San Jose, CA last year, Oculus Connect. I really enjoyed my time there because I think it’s very important for the future of VR to show a variety of work. Everyone in the VR gaming industry knows that “shooting games” have been and will be the bread and butter of the industry. But, who knows how long that will last? There might be a time in which narratives and dramatic storytelling take an upward swing in VR and usher in an entire new user group. I was glad to see these types of discussions happening within the Oculus developer community.

SIGGRAPH: What’s next for “I Am A Man”? Are there plans for a permanent exhibition? And, for you, are you working to create any new experiences in VR or other immersive spaces?

DH: Currently, I’m working with the National Civil Rights Museum (NCRM) to get “I Am A Man” installed as a part of a longer (and semi-permanent) exhibit. The NCRM has had a long history in maintaining a standard of excellence in museum experiences and programs. In 2013 and 2014, the museum underwent a $27.5 million renovation to further support its mission of education, information, and inspiration. Now, the NCRM is looking to expand into immersive experiences through the use of VR. “I Am A Man” has already been shown there in two separate pilot runs, and was warmly received in both cases by Memphis audiences.

Finally, I’m taking what I’ve learned in storytelling and using that to explore new opportunities for VR hardware development. Just as the Oculus Touch Controllers were essential in telling the story the way I wanted to through embodied empathy, I strongly believe we’ve only scratched the surface in the domain of peripheral devices to drive VR gameplay and storytelling. Last fall, the NC State University College of Design, where I teach, granted me lab space to carry out this type of work. Additionally, I worked with the university’s technology transfer office to create a startup that looks to license and commercialize VR devices created in the lab. The result is a company called Logic Grip, and we’ve already filed a design and utility patent on one of our forthcoming peripheral devices. So, to say the least, I’m very excited to develop both the technology and the content for gameplay and narratives that we have not yet experienced.

SIGGRAPH: If you had to pick, what is your favorite SIGGRAPH memory?

DH: It’s hard to distill a single memorable moment from SIGGRAPH because it’s like drinking from the fire hose. There are so many amazing talks, speakers, and exhibits to look at. I do have to say that the exhibit of VR headsets from beyond was breathtaking. It’s crazy to see how far we’ve come, even in the last six years, with the technology, and also to place that in contrast with the drawn-out, slow crawl of heavy and expensive devices from the ’80s. I think in five years we will look back at 2018 and laugh at the years we had VR tethered with a cord to a computer the same way my kids perceive landline phones. 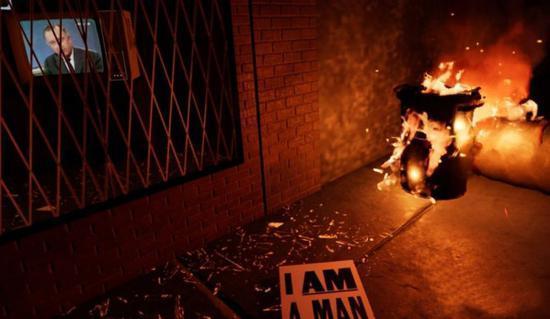