Berlin, 28 May 2020 – Sales revenue generated by fees from online services in Germany rose significantly once again. The segment grossed approximately 461 million euros in 2019, which is an increase of 30 per cent compared to 2018 (353 million euros) – and even that year, the segment had nearly doubled, with growth of 97 per cent. These are the figures released today by game – the German Games Industry Association, based on data collected by the market research company GfK. Fee-based online services are currently available in multiple versions and for a range of different gaming platforms. For example, services on consoles including Nintendo Switch Online, PlayStation Plus and Xbox Live Gold offer options such as playing online with and against other players, saving games in the cloud and receiving discounts on games and expansions. Subscription services for PC such as Origin Access Premier (EA) and Uplay+ (Ubisoft) allow players to pay a fixed monthly fee to access a huge rotating library of games and to play some new games before the release date. With cloud gaming services such as Google Stadia Pro and PlayStation Now, on the other hand, gamers no longer need high-performance hardware to play titles with their full range of graphics, as the computing power to run the games is provided in the cloud. Monthly fees for online services can range from 4 to 10 euros, depending on the provider. Last year, a total of approximately 5.1 million gamers paid for these fee-based services, which is around 300,000 people more than in 2018 (4.8 million). 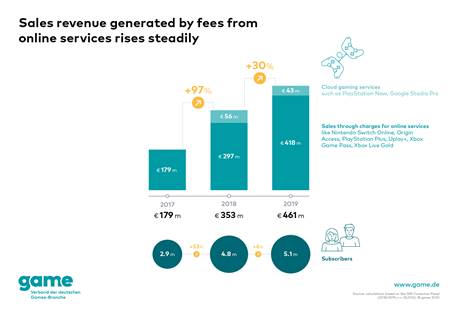 ‘In Germany, growing numbers of gamers are discovering fee-based online services that give them access to an enormous selection of the latest hot titles, offers and discounts for a monthly fee. The strong growth in this segment also indicates how much the games market is currently changing: long-term access and usage rights for games are becoming much more important than purchasing individual titles,’ says Felix Falk, Managing Director of game. ‘Cloud gaming services are an interesting option for many gamers, particularly if we consider future trends and blockbuster titles that require a lot of processing power. All the heavy processing takes place in data centres, so the players themselves no longer need particularly high-performance hardware. There’s a lot going on in this budding market segment at the moment, and we expect to hear much more about it in future.’

As already reported by game, the German games market grew by 6 per cent in 2019, to around 6.2 billion euros. Sales of games hardware, including consoles, gaming PCs and accessories, dropped by 2 per cent from the previous year, to 2.4 billion euros. In contrast, the market for games software showed a gain of 11 per cent: in 2019, a total of about 3.9 billion euros was spent on computer and video games and the charges for the respective online services.