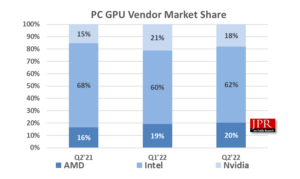 Q2’22 saw a significant decline in GPU and PC shipments quarter to quarter, and the worst may not be over

Tiburon, Calif. August 30, 2022 – Jon Peddie Research reports the growth of the global PC-based graphics processor unit (GPU) market reached 84 million units in Q2’22 and PC CPU shipments decreased by -34% year over year. Overall, GPUs will have a compound annual growth rate of 3.8% during 2022–2026 and reach an installed base of 3,103 million units at the end of the forecast period. Over the next five years, the penetration of discrete GPUs (dGPUs) in the PC will grow to reach a level of 30%.

The GPU’s overall attach rate (which includes integrated and discrete GPUs, desktop, notebook, and workstation) to PCs for the quarter was 121%, down -7.9% from last quarter.

The overall PC CPU market decreased by -7.0% quarter to quarter and decreased -33.7% year to year.

Desktop graphics add-in boards (AIBs that use discrete GPUs) decreased by -22.6% from the last quarter.

This quarter saw 0.0% change in tablet shipments from last quarter.

The second quarter is typically down compared to the previous quarter, and this quarter was down -12.7% from last quarter, which is below the 10-year average of -10.5%.

GPUs have been a leading indicator of the market because a GPU goes into a system before the suppliers ship the PC. Most of the semiconductor vendors are guiding down for the next quarter an average of -2.81%. Last quarter they guided 1.98%, which was too high.

Jon Peddie, president of JPR, noted, “This quarter had overall negative results for the GPU vendors, compared to the last quarter. Global events such as the continued war in Ukraine, Russia’s manipulation of gas supplies to Western Europe, and the subsequent nervousness those events create have put a dampener on Europe’s economy; the UK is in recession with high inflation.”

The US was able to get some significant legislation passed, such as student loan relief, a stronger climate control bill with big provisions for alternative energy sources, and the long-sought CHIPs bill. All of that stimulus and infrastructure investment will position the US in a much stronger position for the flowing decade and longer.

“Forecasting has never been more challenging, and as a result, our forecast and others’ will get revised frequently as new data appears,” Peddie said.

JPR also publishes a series of reports on the graphics add-in board market and PC gaming hardware market, which covers the total market, including systems and accessories, and looks at 31 countries.

For more information, call (415) 435-9368 or visit the Jon Peddie Research website at www.jonpeddie.com.

Contact Robert Dow at JPR ([email protected]) with any questions on JPR reports and services.

Jon Peddie Research has been active in the graphics and multimedia fields for more than 30 years. JPR is a technically oriented multimedia and graphics research and consulting firm. Based in Tiburon, California, JPR provides consulting, research, and other specialized services to technology companies in a variety of fields including, graphics development, multimedia for professional applications and consumer electronics, high-end computing, and Internet-access product development.