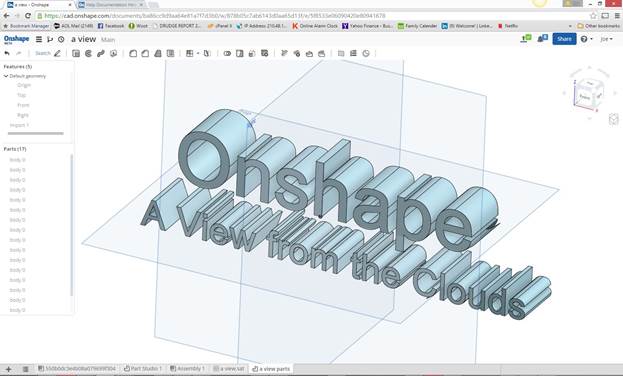 Software as a service, SaaS, is unquestionably the unmitigated and unstoppable future. But one can’t simply take an existing localized, on-premise program like CAD, and mount it on some servers and call it SaaS.

Seeing that somewhat obvious conclusion, PTC, which has made some very clever strategic acquisitions since Jim Heppelmann has been CEO, made another bold move and acquired OnShape. OnShape is the first SaaS CAD company that was started by John Hirschtick. His previous company SolidWorks was bought by Dassault. There’re aren’t many people, if any, who know more about CAD and 3D modeling than John.

Heppelmann acquired the augmented reality pioneer and leader Vuforia from Qualcomm in 2015, and a lot of industry know-it-alls scratched their heads and asked why. Today the why is obvious, and PTC has invested heavily in Vuforia since the acquisition, making PTC the leading AR company in the industry.

There’s a direct correlation between the proliferation of industrial augmented reality apps and the demand for 3D content. At its recent LiveWorx conference, Hepplemann and others demonstrated how critical AR is to industries of all types, and the integrated application of SaaS into that solution is obvious and almost mandatory.

Last week, PTC announced it had acquired OnShape for $470 million. OnShape, founded in 2012, has attracted over $150 million in investments and funding and has more than 5,000 subscribers.

PTC now offers its customers the opportunity to choose the platform that’s right for them—on-premises or SaaS. There are advantages and benefits to both.

Heppelmann says small- and medium-sized CAD customers in the high-growth part of the CAD market are shifting their interest toward SaaS delivery models, and he expects interest from larger customers to grow over time.

“The acquisition of Onshape complements our on-premises business with the industry’s only proven, scalable pure SaaS platform, which we expect will open new CAD and PLM growth opportunities while positioning PTC to be the leader as the market transitions toward the SaaS model,” he added.

The software also includes data management and collaboration features that enable large teams of designers and developers to create content more efficiently. You can think of it like Google Docs, where users can edit the same file in realtime in collaboration.

Onshape will operate as a business unit within PTC, the same as Vuforia, the popular augmented reality platform, does.

What do we think?

PTC has a history of making smart investments and acquisitions and then backing them. For example, PTC paid $65 million for Vuforia in 2015 and since then has invested another $200 million. That investment, in turn, has made AR, which now cuts across all of PTC’s products worth more than 25% of its business. OnShape will benefit from an expanded potential customer base as well as new and extensive resources it could only have dreamt about. In turn, OnShape expands PTC’s TAM, making this a truly synergistic acquisition.