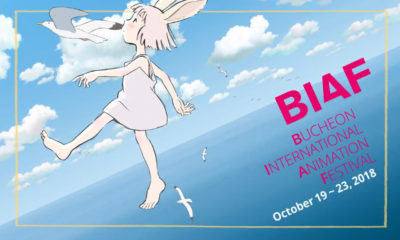 Roughly a month after the short film selections were revealed, the Bucheon International Animation Festival has announced that nine movies will be screening in the 2018 Feature Film International Competition. The selection includes two world premieres for South Korean films, and includes titles from France, Iran, Brazil, Japan and more.

Flavors of Youth
China / Japan | 2018 | 74’ – Anthology
Li Haolin, Joshua Yi, Takeuchi Yoshitaka
Hidamari no Choshoku (Sunny Breakfast) tells the story of a young man working in Beijing who recalls the childhood he spent in his hometown with his grandmother, until he learns that she is very sick. Chiisana Fashion Show exposes a quarrel between two orphan sisters. One of them wants to become a model, the other pursues further studies, and a gap is created between them. Shanghai Koi (Shanghai Love) tells a love story set in the Shanghai of the 1990s: A young man is in love with his longtime childhood friend, but never confessed his feelings. After reaching adulthood they both moved away, until an event brings them back together…
Trailer

Funan
France / Belgium / Luxembourg | 2018 | 87′ | Asian Premiere
Denis Do
In 1975 in Phnom Penh, Chou leads an enchanted life until one morning when the Khmer Rouge madness plunges Cambodia into horror. The population is deported to camps and Chou’s confronted to the pain of powerlessness. When her four-year-old son is snatched from her by a fleeing crown, her world falls apart but she never loses hope. Funan is the incredibly powerful story of a young mother’s fight to save her son and keep her family together in a barbaric time.
Trailer

The Last Fiction
Iran | 2018 | 60’40” | Asian Premiere
Ashkan Rahgozar
Based on the classic Iranian tale “The Shahnameh” (“The Book of Kings”) by Ferdowsi, this film follows Zahak’s treacherous rise to the throne in Jamkard in Persia. The young and naïve hero Afaridoun will have to save the kingdom and its people from darkness. But he must first conquer his own demons in this portrayal of Persian mythology which reveals human nature.
Trailer

A Man Is Dead
France | 2018 | 65′ | Asian Premiere
Olivier Cossu
Brest, 1950. Workers are on strike calling in vain for higher wages. P’tit Zef, Édouard, and Désiré take part in the demonstrations organized by CGT syndicate when the situation suddenly becomes violent. The police shoot into the crowd and a bullet hits Édouard. The CGT calls upon the filmmaker René Vautier to film the events.
Trailer

The Moon in the Hidden Woods
South Korea | 2018 | 90’ | World Premiere
Umehara Takahiro
Shooting star hunter Jang-gu went hunting for star pieces when he meets Nabilera, a girl born with the destiny of the moon. As their fates cross, they reveal the secret of the suddenly vanished moon. A conspiracy continued for 1,000 years finally reveals its true nature.

Motel Rose
South Korea | 2018 | 77′ | World Premiere
Yeo Eun-a
Longing to become like her idol, Rose, middle school student Mina starts working at Motel Rose due to her financial difficulties. Motel Rose is located in the downtown back alley red district where Mina does all the cleaning. There, she meets Hanna, who resembles Rose. Teenage runaway Hanna sells her body at the Motel, but Mina secretly wishes to become like Rose one day.

Okko’s Inn
Japan | 2018 | 60’35” | Asian Premiere
Kosaka Kitaro
After losing her parents in a car accident, Okko starts living with her grandmother in the countryside who runs a hot-spring ryokan (traditional Japanese inn). There, the young girl can somehow see friendly ghosts who help her get used to the ryokan life, and she becomes the apprentice as its future proprietress after her grandmother.
Trailer

Tito and the Birds
Brazil | 2018 | 60’13” | Asian Premiere
Gustavo Steinberg, Gabriel Matioli Yazbek Bitar & André Catoto Dias
The film follows the life of Tito, a 10-year-old boy who is on mission to save the world from an unusual epidemic: people fall ill whenever they are scared. What would we do if an epidemic of fear spread? And what if the only cure was in something as simple and natural as birdsong?
Trailer