Journeying Into the Unknown Effects of ‘Frozen 2’ The Nokk, a water spirit, from Disney’s highly anticipated ‘Frozen’ sequel, ‘Frozen 2,’ which opens in theatres today. All images © 2019 Disney. All Rights Reserved.

With today’s release of Disney’s Frozen 2, the highly anticipated sequel to Frozen, the highest grossing animated feature of all time, audiences finally return to the Nordic lands of Arendelle, where together with Princess Anna, Kristoff, Olaf and Sven, Queen Elsa faces a dangerous but remarkable journey into the mysterious enchanted forests and dark seas far beyond the city.

Returning to helm the sequel are Frozen directors Jennifer Lee and Chris Buck; Peter Del Vecho returns as well as producer. Also returning is Disney veteran VFX supervisor Steve Goldberg, who received a BAFTA nomination for his visual effects work on Disney’s 1992 hit, Aladdin, and was VFX supervisor on Frozen as well as Tangled. Goldberg was tasked once again with marshalling the production’s technical resources, both human and digital, in support of the filmmakers’ creative vision. And as far as technical resources go, the sequel was arguably the studio’s most sophisticated and challenging film ever. For Goldberg and the film’s production team, Frozen 2 was truly a journey into the unknown.

For Goldberg, his work on the film started early, at the script stage. “I started on the show around three years out,” he shares. “I read the script and spent a lot of time talking with the directors and production designer to find out what style film ultimately they wanted to see up on the screen. Then, I visualized in my mind what the studio could achieve with our then current tool set and know how, what we really didn’t yet know how to achieve, and what we maybe had done a little bit of on a previous show, but certainly couldn’t sustain for an entire movie.“

Because Disney always wants the “look” to differ from film to film, Goldberg next tried to determine what production tools were needed, whether or not they had to be developed, and what visual or technology tests needed to be performed in terms of the desired look of the film. “At Disney, there is a great desire not to stick to any ‘house style,’ but to produce films that differ from our previous movies,” Goldberg states. “Wreck it Ralph is quite different from Frozen, which is different from Moana, which is different from Zootopia. So, we strive to support our filmmakers as far as how they want their film to look.”

After helping assign department heads, such as effects, layout and animation, and getting important early testing underway, Goldberg moved head-first into pre-production. “Once we put our [department] heads in place, we go into pre-production,” he describes. “As we start asset production, I’m basically overseeing and making sure everyone and everything is pointed in the same direction. We carve out time for new asset testing, because even though for some, we know exactly how to handle, some are quite different from anything we’ve done before. Like the Nokk… our water horse. For that character, I set aside a lot of time for testing because, for example, who knows what a water horse looks like underwater? So, I’ll make sure we’re assembling a team that understands the level of experimentation needed, and shepherd that process through to make sure that we’re really giving it the time it needs to breathe.”

“From there, we got into shot production, really running alongside the directors during reviews and working with all the departments to make sure that ultimately, all the work was in line with what the directors were looking for,” Goldberg adds. “And that can entail a thousand different things.”

With a number of complicated set pieces and new characters, including the Dark Sea, the Nokk and Gale, the elemental wind spirit, Goldberg needed to spend time assessing early screenings with the filmmakers, figuring out exactly which effects they could fit into the film, based on the budget and schedule. “The number of big effects set pieces in this film is far beyond what we’ve done in the past,” Goldberg notes. “Looking at the script, seeing some very early screenings, we realized that we couldn’t do everything being asked of us if too much came at the end; it would just completely overburden our resources and ability to make the film. So, working with Jen, Chris and Peter, we sat down, and I said, ‘You’ve got a big movie here. The only way we’re going to get this through is if we really parse out very carefully these big effects set pieces. They have to drop at certain times. Are we all good with that?’ And we all held hands and said, ‘Yes, we’ll do it.’ And we did.” 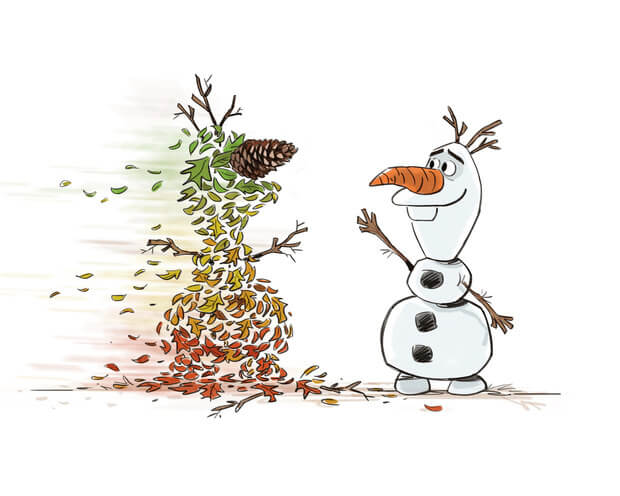 Part of that early agreement was on the Dark Sea sequence. “The Dark Sea sequence actually went through quite early because the directors were feeling very good about it,” Goldberg continues. “Of course, everything changes while it’s in production. But being able to kick that off and get the work going relatively early on really helped pave the way for some of the bigger effects set pieces that were to come. But, we were up and running pretty heavy with effects quite early in general. We had a very tired effects department at the end of this film because they were really running at a fast pace throughout the entire film, rather than kind of going slow early and peaking at the end, which happens quite often.”

While the greatest technical and effects challenge on Frozen was snow – including blizzards – and how it interacted with the characters, Frozen 2 was quite different. Frozen 2 isn’t set in winter; its set in fall.  There’s not much if any snow. As the characters journey far from the city of Arendelle, they encounter an enchanted forest as well as the elemental spirits. “This film really doesn’t have much of the snow and out of control magic as Frozen did,” Goldberg states. “Certainly, there’s Elsa magic, which has grown in intensity between the two films. But a lot of what we’re taking on is really brand new, like the Dark Sea sequence. We’ve got these elements, the spirits of the enchanted forest, air, fire, water and earth… and the Nokk, a realization of the water spirit. We also have a wind spirit, which presented unique challenges, for example, in terms of layout. What do you see for wind? How are we controlling the wind? What does an animator see when they’re animating wind? Because usually we see the result of what’s caught up in the wind. We’ll see leaves or pollen or things like that, or we’ll see how the wind is affecting a character’s hair or clothing. One of the big tests we did early on was trying to figure out how to deal with wind; how do all these different departments work with wind and the pass that downstream.”

According to Goldberg, “We worked with technology to develop a real-time rig that was extremely interactive, where we could create a path, change the path, and change the timing along that path in real-time, so that layout could place it in 3D space, animation could go ahead and tweak it, it would work with the characters and it basically represented a wind field, if you will. And we could also control its size. Is the wind big enough to impact an entire building, or just big enough to blow through this room? Is it small enough to wrap around my arm and affect my sleeves? No previous film really needed anything like that. So, we got to develop fun new stuff; at the same time, we realized considerable savings because we’d done so much water in Moana that we didn’t have to go develop that from scratch. Addressing these challenges was really fun.”

‘Into the Unknown’ concept designs The production team also devoted considerable attention to other key environments central to the story. “Aside from water and wind, we got a lot deeper into foliage tools,” Goldberg recounts. “Since we’re in a forest for the majority of the film, and we have a wind spirit character, we wanted to make sure that the forest always felt alive. We ended up with four different ways to animate foliage depending on what kind it was. We’d obviously built forests before. Tangled had a lot of forest. Moana had different types of forests… there was a lot of organic growth on the islands. But in Frozen 2, we’re spending so much time in the forest, we made sure we developed techniques that would support the level of aesthetic composition we hadn’t really approached before.”

But in addition to the film’s sophisticated production pipeline and processes, Goldberg spoke in earnest about the extensive departmental collaboration he witnessed. “There was a lot of focus on social engineering, if you will, to achieve a lot of what we hit on the show,” he reveals. “It was a tremendously collaborative show. We had sophisticated new characters, like the Nokk, or Gale, that required the input and touch of so many different departments. The way they all worked together is as significant a breakthrough to me as some of the more technical tools. We achieved what I think was the truest, most complete level of collaboration that I’ve ever encountered on a show. Not only is it about the talent, its about a generosity of spirit. I can’t say enough about that. Checking your ego at the door. So to me, that has been extremely exciting and every bit as rewarding as solving the most challenging production problem.”