Alpha Animation and Culture Co., Ltd. is one of the most powerful and promising animation and entertainment cultural industry group companies in China. After three transformations and upgradings, it has successfully created a pan-entertainment industry chain system that integrates animation, toys, baby, authorization, media, film and television, and games with IP as the core, realizing the operation from the elaborate IP to the whole industry chain. mode. 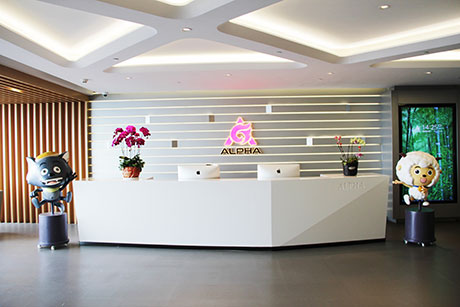 In addition to building and cultivating well-known IP, Alpha is actively engaged in the development of pan-entertainment industry. Driven by a series of elaborate IP, toy sales and retail sales of Alpha hit record highs. At the same time, Alpha has a strong grasp of the economy and consumption upgrade trend of the second child. It owns the North American leading baby brand “Baby Trend”, the domestic leading baby brand Auby and the German innovative brand Micolor,  integrating its industries of content, media,  and consumer goods etc., to create a one-stop baby service platform for global users.

In recent years, Alpha has established animation research & development centers and film project companies in the US, and introduced Hollywood film groups such as Disney and Paramount Pictures to enhance the content and consumer product creativity to an international level. Alpha continues to accelerate the expansion of its global market, with the proportion of its overseas revenue increasing year by year. The company has branches in Los Angeles, Boston, London, Paris, Jakarta, Seoul, Bangkok, etc., and its overseas business covers more than 40 countries or regions. In December 1993, Chenghai Audi Toy Industry Co., Ltd. was formally established, when Audi started to develop from a manual workshop to enterprise.

In 1996, the company invested a million yuan to hold the National Four-Wheel Drive Tournament, which was organized in nearly 28 cities, with nearly 6 hundred thousand people taking part. The National Sports Commission included the project in the national youth car model sports permanent projects, with Audi 4WD designated as the standard material, which is the beginning of the national “Audi Cup” competition.

In May 1996, the company held its first contributors’ conference in Dongshan Island, Fujian Province, which forms the prototype of Audi’s dealers’ group.

In 1996, with the assistance of Malaysian agents, the company successfully held the national four-wheel drive competition in Malaysia，which became popular there.

In 1996, the “Four-Wheel Drive Technology Project” was included in the national “Spark Program”.

In December of 1997, the company officially changed its name to “Guangdong Audi Toy Industry Co., Ltd.”.

In December 1998, the company cooperated with the famous Japanese toy company Nintendo Co., Ltd. and TOMY Co., Ltd., investing 20 million yuan to purchase the exclusive production and sales right of the “Pokemon” series of toy products in China, and began to integrate with the international toy industry to enhance the brand.

In 1999, as the sole representative of domestic toy companies, the company became a member of Chinese Enterprise Delegation at Asia-Pacific Economic Cooperation (APEC).

In December of 1999, the company’s electric toys and plastic toys won “export product license”, which indicated that the production conditions of Alpha met the standard of export quality licensing system and could directly trade with foreign countries.

In July of 2000, with the first phase of the project of an industrial park covering an area of ​​70,000 square meters completed, the company was completely relocated, and its development scale once again expanding.

In February of 2000, after the Four-Wheel Drive, Audi launched a new fashion product called “Yo-Yo”, which made quite a stir in the industry.

In 2002, the Distribution Management System was established with 15 offices set up nationwide.

On April 26, 2002, Alpha successfully passed the examinations and verifications of TUV Rheinland and the China Quality Certification Center (CQC)’s third-party certification agency. This is the first time that Alpha has been certified by two international authorities since it introduced the ISO9000 system in June of 2001.

On September 4, 2003, the Guangzhou Distributing Center was unveiled. The company began to form a new development model, with the marketing and management moving to the front and the professional manufacturing base consolidated at the rear.

In October 2003, the official launch of the company’s MRP system marked a substantial step in the company’s information management.

In March of 2004, Alpha joined China Association for Quality and became a corporate member.

In 2004, it cooperated with Bandai, the largest toy company in Japan, authorizing the development, production and sales of “Ultraman Tiga” products.

In 2006, the provincial engineering technology research and development center was officially listed in Aofei.

In 2007, in cooperation with Hejun Consulting and Consulting Co., Ltd., the “Promoting Marketing Pipeline” project was launched.

On October 24, 2007, the company officially issued a document announcing the organizational structure and appointment of the company.

On August 11, 2015, Aofei’s animation of 900 million acquisitions has a demon atmosphere.

With IP as the core, it integrates animation, toy, baby, authorization, media, film and television, games and other pan-entertainment industry chain system.