Call for Entries: Submit Your Films to ITFS 2019

Deadline for submissions to Germany’s 26th Festival of Animated Film Stuttgart is December 1, 2018. The 26th Stuttgart International Festival of Animated Film, taking place April 30 – May 5, 2019, is not accepting entries. Animated films produced after October 1, 2017 can be submitted to the following competition categories:

The deadline for submissions is December 1, 2018. For entry rules and submission requirements, visit the festival website at http://www.itfs.de/en/festival/competitions. 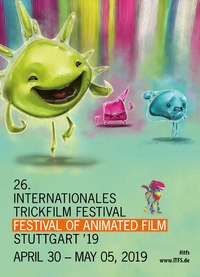 The Festival offers filmmakers, directors and production companies a high-profile platform to show their films to a wide audience as well as to professional visitors. Animation film fans of all ages have the opportunity to admire animated short and feature-length films, series and games for six days. The Festival presents a full, up-to-date spectrum of animated filmmaking and its intersections with visual effects, architecture, art, design, music and games.

Established in 1982, ITFS has evolved into a festival that stands out among the world’s events for animated film. It presents the full and up-to-date spectrum of animated filmmaking and its intersections with visual effects, architecture, art, design, music, and games. The ITFS offers a platform for directors, production companies and distributors to showcase their films and transmedia projects to an interested, broad audience and a large number of industry representatives. In spring 2019, the Stuttgart region will again become the worldwide center of animated film for six days and nights.