Absent from the ‘Toy Story’ narrative after having been given away long ago, Bo has dusted herself off to become a strong, funny and adventurous female character that belies her seemingly fragile porcelain exterior.

The toys – Bo Peep, Woody, Buzz Lightyear, Bunny and Ducky – find themselves in the dusty shadows of Second Chance Antiques in Disney and Pixar’s ‘Toy Story 4,’ which opens in U.S. theaters on June 21. All images ©2019 Disney/Pixar. All Rights Reserved.

With the highly anticipated June 21 release of Toy Story 4, the latest installment in the studio’s most beloved and successful franchise, still several weeks away, Disney and Pixar have both been quite careful with the film’s rollout, revealing just enough to whet our appetites without giving away too much of the story. However, in addition to sharing new characters like Forky, Ducky and Bunny and Duke Caboom, director Josh Cooley, producers Jonas Rivera and Mark Nielsen, and key artists of their production team have revealed some details about one important storyline: the return of Bo Peep, voiced by Annie Potts, a key early character in the Toy Story world who returns to everyone’s surprise, especially Woody’s, and who, according to Rivera, “is really the most important piece of the movie.”

In the new film, our happy toy gang joins their kid, Bonnie, on a family vacation road trip, where Woody has an unexpected reunion with his long-lost friend Bo Peep. Bo, along with her sheep, if you recall, resided on the base of a baby’s lamp in Andy’s sister’s room, which was given away quite some time ago. Her story, as it unfolds, is that after being separated from Woody for years, though she became chipped and discarded, her spirit was far from broken. She has become an adventure-seeker whose strength and sarcasm belie her delicate porcelain exterior. Though her life changed dramatically, Bo didn’t just sit around. Long ago, according to screenwriter Stephany Folsom, “She decided to make the best of her situation, pick herself up by her bootstraps and stand on her own two porcelain feet.”

Reunited with Woody after all these years, Bo realizes just how much she’s missed him, and can’t wait to show him what she’s been up to. “Bo’s taken control of her own destiny,” Cooley says. “While Woody was watching Andy grow up, Bo gathered dust until she took it upon herself to head out into the world. And when Woody shows up, they can’t believe that they’ve found each other again.” Nielsen shares, “There is definitely love between them. We see in the prologue just how hard it was for Woody to let her go.”

Annie Potts returns as the voice of Bo. “Annie not only brings emotion to Bo, she completely fleshes out that character,” Cooley notes. “She’s heartwarming and funny, and Annie has a natural sarcasm that’s just perfect.”

Bo introduces Woody to her best friend, Giggle McDimples, a miniature plastic doll from the 1980s.

“When John Lasseter originally talked about this movie, it was going to be an entire love story between Bo Peep and Woody,” the director continues. “That’s obviously changed. How much of a love story is there still baked into the movie as is? They have a relationship from the previous films, so there’s definitely still an element of that. Remember that Raiders of the Lost Ark isn’t a love story, but it has that great romantic element in it. So, it was clear our movie couldn’t just be a romantic comedy. That would make it a tiny people movie instead of a Toy Story film.”

Rivera concurs. “During development, all the early versions of the film always had romantic comedy roots,” he remarks. “But we felt that although Bo was a worthy character, that idea made the film become more of a human story. Starting about two years ago, we started thinking about making it Woody centric. What was his worst fear? Well, he said it all along… a lost toy.”

Nielsen describes how a “Team Bo” evolved on the production, consisting of a select group of artists from story, art and animation that rallied around the idea of keeping Bo special and unique, a critical, standout character that didn’t fall into tropes that you typically see in action films. “It was very important to us that Bo had a different world view than Woody,” the producer explains. “Early on, we decided to steer away from a romantic comedy and back towards more of an adventure that had a lot of humor in it. We got unflinching feedback from that group about how Bo would act and hold herself in any given situation.”

Since we hadn’t seen Bo since Toy Story 2, the new story gave Pixar an opportunity for Bo to evolve over those intervening years. For story artist Carrie Hobson, working on Bo was a special opportunity she was all too happy to take advantage of. “Knowing she was back, getting a chance to work on was what excited me about coming onto this project,” she says. “This question was put out there in Toy Story 3 that they’d lost toys along the way, even Bo. What happened to her? As a storyteller I was like, ‘Oooh, that’s up to us to figure out!’ There’s so much potential here for nuance and complexity in her as a character. That’s just what I live for!”

Woody and Bo turn to a 1970s toy called Duke Caboom for help.

“I loved being part of the process of putting a strong woman on screen,” adds directing animator Becki Tower. “Because that makes you really think, ‘What do I see as a strong woman?’ You ask yourself, ‘Why do I think this visually represents that idea? Or this?’ You’re always asking the questions, ‘Why would Bo do this… or that? Why would Bo move this way or that way?’  You do a lot of soul searching regarding your own biases and stereotypes. Do we want that acting moment up there? Does it feel like a stereotype? Why? How do we make it more Bo and less what people think they want to see in Bo? There’s a constant investigation of whether or not we’re making the best choice.”

Hobson relished the challenge of creating a character we’d enjoyed meeting early in the Toy Story franchise, but never really had an opportunity to know until now. “What made her compelling from a story standpoint is that as true to life, sometimes, you only get to see the surface of a character,” Hobson says. “But we want to know what their story is. What their deal is. For Bo, this was an opportunity to learn a whole new side of her character. And ironically, she is made of porcelain, but she’s not a fragile character, which is a cool play on what you might presume and what you could learn about her character.”

While being careful not to disclose too much, Cooley does share that, “If you asked Woody, ‘What was the most important moment of your life?’ he’d say, ‘Meeting Bo Peep for the second time.’ Our goal was to make this meeting with her so powerful that it was deserving of Toy Story 4.” Working from that key concept, the story team wrestled with a critical set of questions: “Seeing Woody after all that time, what would Bo’s reaction be?;” “What would Woody’s be?;” “How can we make sure this reunion feels authentic with where they are in the story?”

“At one point, Bo delivers a very powerful line to Woody,” Carrie describes. “And just in how she delivers it, we had to determine, ‘Does she make eye contact? Does she hold it? When does she break gaze?’ I swear that was a two-hour conversation on one shot that ultimately we animated six different ways. We tried so many different takes on what her line would be, what his line would be. Which one is really Bo? Which one is perfect for this moment? They all work, but which one felt authentic to how her heart would truly feel? You might not even see those differences, but you’d feel them.”

24 years have passed since ‘Toy Story’ debuted and the technology — as well as the experience and knowledge of the people behind it — has advanced lightyears, so to speak. These images showcase those advances in terms of character shapes and textures, rigging, rendering and lighting. 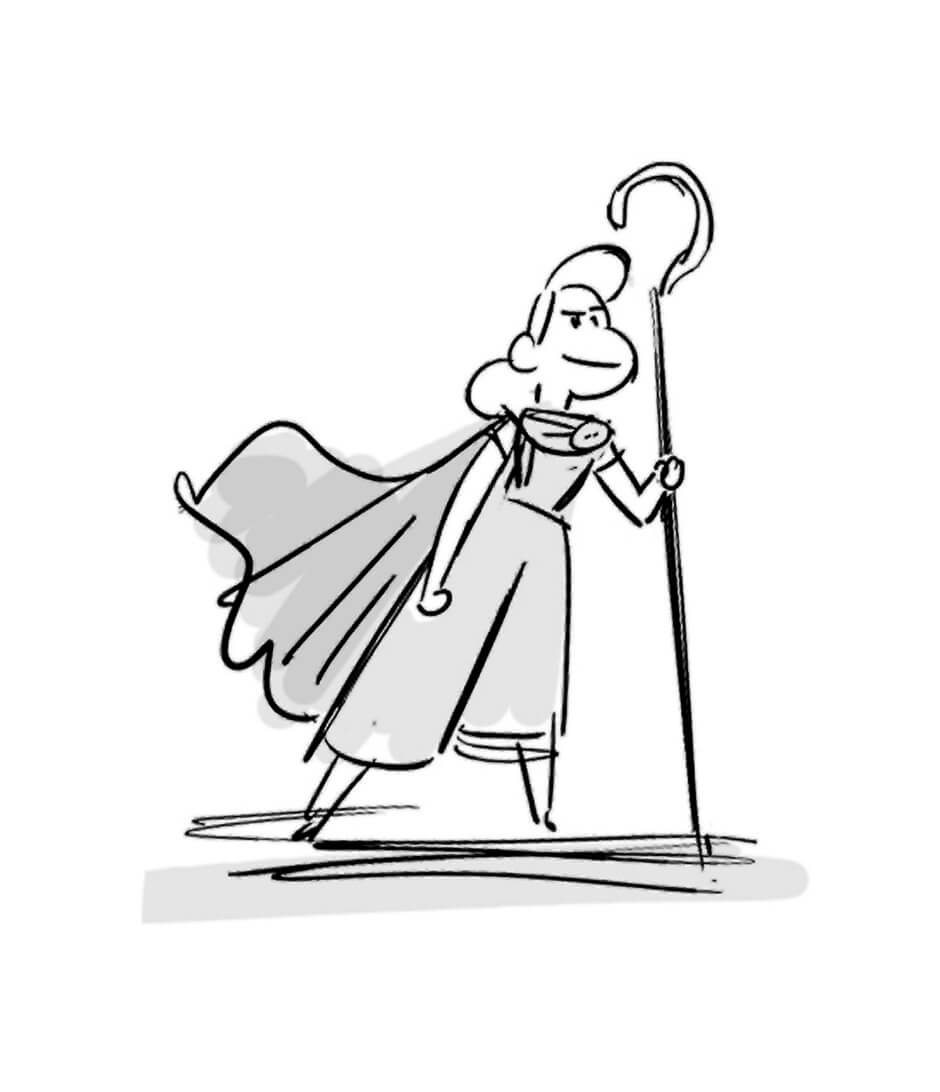