Tiburon, Calif. May 31, 2022 – Jon Peddie Research reports that the global PC-based graphics processor units (GPU) market reached 96 million units in Q1’22 and PC GPUs shipments decreased 6.2%. However, the fundamentals of the GPU and PC market are solid over the long term, JPR predicts GPUs will have a compound annual growth rate of 6.3% during 2022–2026 and reach an installed base of 3.3 million units at the end of the forecast period. Over the next five years, the penetration of discrete GPUs (dGPU) in the PC market will grow to reach a level of 46%.

The GPU’s overall attach rate (which includes integrated and discrete GPUs, desktops, notebooks, and workstations) to PCs for the quarter was 129%, up 5.0% from last quarter.

Desktop graphics add-in boards (AIBs that use discrete GPUs) increased by 1.4% from the last quarter.

This quarter saw a 16.5% drop in tablet shipments from last quarter.

The first quarter is typically flat to down compared to the previous quarter. This quarter was down -6.2% from last quarter, which is above the 10-year average of -10.2%. GPUs are traditionally a leading indicator of the market because a GPU goes into a system before the suppliers ship the PC. Most of the semiconductor vendors are guiding up for the next quarter, an average of 1.99%. Last quarter they guided -0.4%, which was too high.

The total (desktop and notebook) market share for the two dGPU suppliers is shown in the following table. 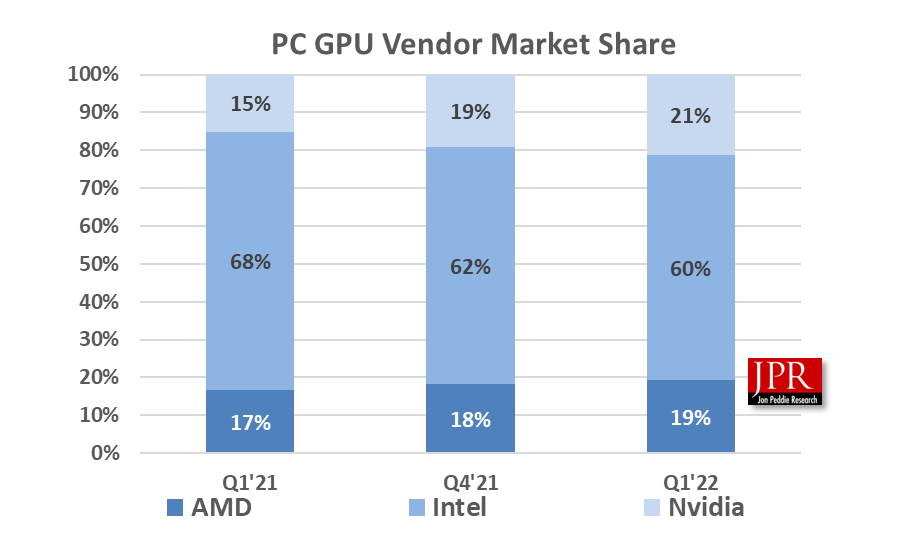 The swirl of influences at play includes macro disruptions in Europe and North America as COVID comes and goes along with shifting lockdown strategies. The return to work from COVID and return to offices is also a bit of a rolling disruption, and every country negotiates a shift that seems to be pleasing nobody. China has taken its own path to dealing with COVID, which continues to affect the availability of goods and components. And now, there is war.

Jon Peddie, president of JPR, noted, “Consumers are cautious despite new product introductions from AMD, Intel, and Nvidia (AIN) in the second half. Therefore, our forecast for the year is a modest 2% to 3% for GPUs.

JPR also publishes a series of reports on the graphics add-in board market and PC gaming hardware market, which covers the total market, including systems and accessories, and looks at 31 countries.

JPR’s Market Watch is available in electronic and hard copy editions and sells for $2,750. This report includes an Excel workbook with the data used to create the charts, the charts themselves, and supplemental information. The annual subscription price for JPR’s Market Watch is $5,500 and includes four quarterly issues. Full subscribers to JPR services receive TechWatch (the company’s biweekly report) and a copy of Market Watch as part of their subscription.

Contact Robert Dow at JPR ([email protected]) with any questions on JPR reports and services.

Jon Peddie Research has been active in the graphics and multimedia fields for more than 30 years. JPR is a technically oriented multimedia and graphics research and consulting firm. Based in Tiburon, California, JPR provides consulting, research, and other specialized services to technology companies in a variety of fields including, graphics development, multimedia for professional applications and consumer electronics, high-end computing, and Internet-access product development.