As part of its ongoing research on the PC graphics market, Jon Peddie Research (JPR) has released its Market Watch report for the second quarter of 2020. Before 2020, the PC market was showing signs of improvement and settling into a new normal. JPR’s Market Watch report confirms that trend for the second quarter of 2020, but with some surprises results for this very unusual year. 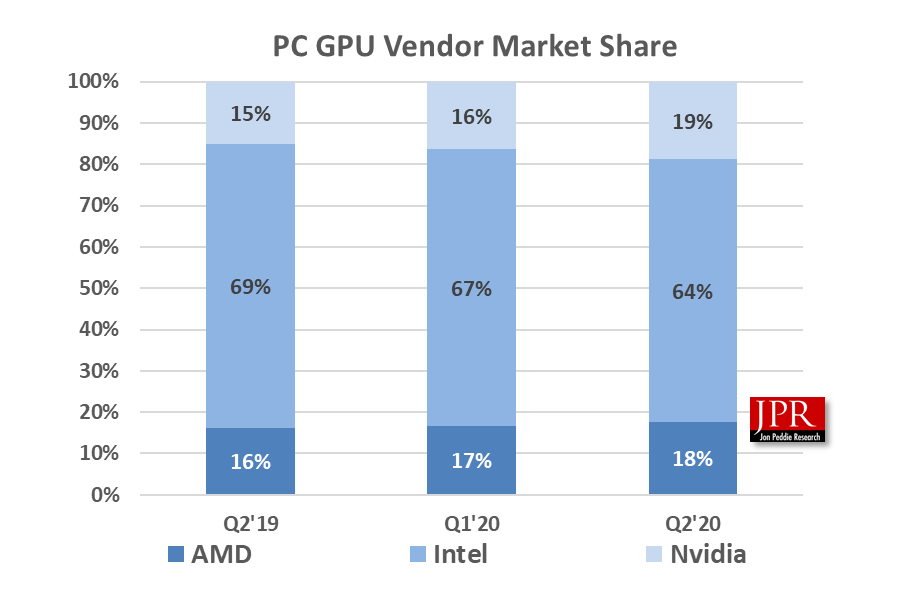 Typically, the second quarter is down compared to the previous quarter. This quarter was up as the influence of the pandemic has had unpredictable market effects. 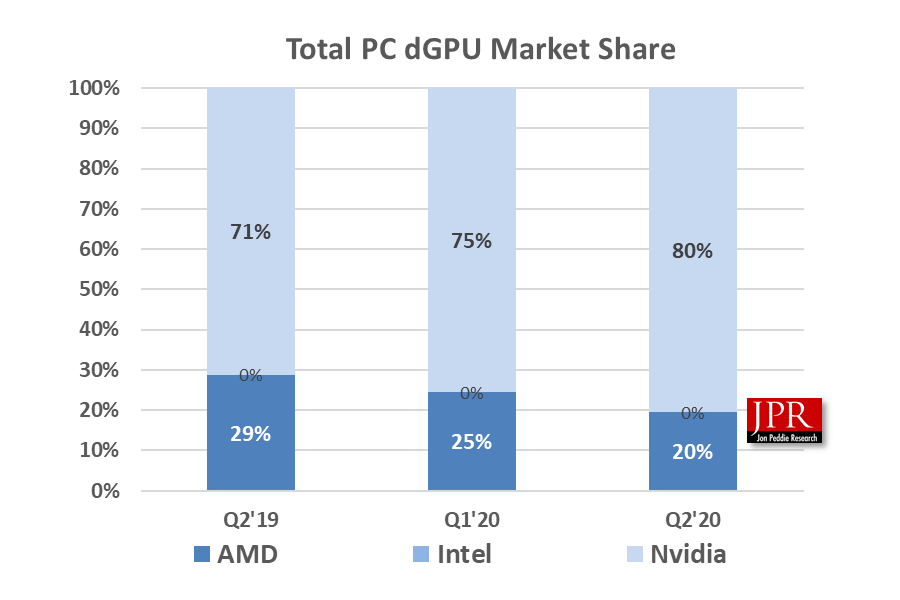 The above charts express the supplier’s market share, in the current quarter, as well as quarter-to-quarter results, and year-to-year quarter results.

Jon Peddie, President of JPR, notes “the pandemic has been disruptive and had varying effects on the market. Some sales that might have occurred in Q3 (such as notebooks for the back-to-school season) have been pulled in to Q2 while desktop sales declined. Intel’s manufacturing challenges have also negatively affected desktop sales.

“We believe the stay at home orders have continued to increase demand in spite of the record-setting unemployment levels. As economies open up, consumer confidence will be an important metric to watch.”

GPUs are traditionally a leading indicator of the market since a GPU goes into every system before suppliers’ ships the PC, most of the semiconductor vendors are guiding up for next quarter, by an average of 12%. Some of that guidance is based on normal seasonality, but there is also a factor for the Coronavirus impact.

JPR also publishes a series of reports on the graphics Add-in-Board Market and PC Gaming Hardware Market, which covers the total market including system and accessories, and looks at 31 countries.

JPR’s Market Watch is available now in both electronic and hard copy editions and sells for $2,750. Included with this report is an Excel workbook with the data used to create the charts, the charts themselves, and supplemental information. The annual subscription price for JPR’s Market Watch is $5,500 and includes four quarterly issues. Full subscribers to JPR services receive Tech Watch (the company’s bi-weekly report) and a copy of Market Watch as part of their subscription.

Contact Robert Dow at JPR ([email protected]) for a free sample of TechWatch.

Dr. Jon Peddie has been active in the graphics and multimedia fields for more than 30 years.

Ted Pollak, JPR’s Senior Gaming Analyst, has been following the video game tech market for 22 years. Jon Peddie Research is a technically oriented multimedia and graphics research and consulting firm. Based in Tiburon, California, JPR provides consulting, research, and other specialized services to technology companies in a variety of fields including graphics development, multimedia for professional applications and consumer electronics, high-end computing and gaming/simulation.