Special print edition distributed at Annecy 2017 celebrates a year’s worth of creative excellence since industry professionals last gathered in France at the world’s largest and most prestigious film festival dedicated to the art of animation. This special print edition, which is being distributed to attendees at Annecy 2017, celebrates a year’s worth of creative excellence since industry professionals last gathered in France at the annual home of the world’s largest and most prestigious film festival dedicated to the art of animation.

Expertly shepherded and curated by the festival’s creative director, Marcel Jean, working alongside MIFA market director Mickael Marin, Annecy continues to innovate, each year expanding its scope and vision to host a truly international celebration of everything animated in this uniquely beautiful lakeside town.

From Pixar’s Cars 3 to DreamWorks Animation’s Captain Underpants: The First Epic Movie, animated features are taking center stage at Annecy, and our special festival edition of Animation World Magazine has them all. Our cover story on Illumination Entertainment’s Despicable Me 3discusses the evolution of the blockbuster franchise and its Minions spinoff with directors Pierre Coffin and Kyle Balda, and producers Janet Healy and Chris Meledandri. We also talk to director Michael Dudok de Wit about his feature film debut, the Oscar-nominated The Red Turtle, produced with Studio Ghibli, which premiered at Annecy last year. And director Claude Barras provides a wealth of interesting background on his Oscar-nominated My Life as a Zucchini.

This year’s guest country is China, whose animation industry continues to grow in size, technological sophistication and storytelling prowess. Annecy’s celebration of China centers around a major month-long art exhibition presented at the Château d’Annecy Musée lacs et montagnes, with classic film materials from the famed Shanghai Animation Film Studio on display alongside a number of installations by artists and filmmakers, including Sun Xun, Haiyang Wang, Wu Chao and Weilun Xia, who are working at the frontiers of contemporary art and animation. The tribute to China also includes a dozen retrospective programs, including a screening of China’s first animated feature Princess Iron Fan(1941), by brothers Laiming and Guchan Wan; three programs of historical short films; retrospectives of the work of Sun Xun, Xu An and Xi Chen; a program of short films from contemporary artists; and the best shorts from Chinese schools. 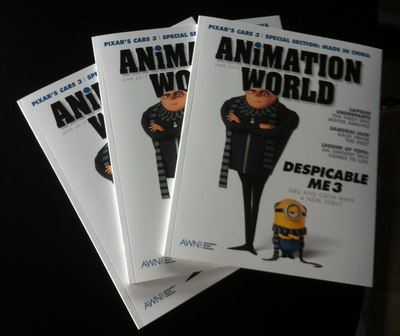 The past 12 months have seen a record number of high-quality animated shorts by filmmakers from around the globe, and we’ve spotlighted three of them here: U.K. director Daisy Jacobs’ The Full Story, the follow-up to her Oscar-nominated The Bigger Picture; Croatian animator Špela Čadež’s stop-motion Nighthawk, produced by Bonobostudio; and Canadian animator Steven Woloshen’s latest project, Casino.

Grab a tight-fitting café chair, order a double espresso, and enjoy AWN.com’s celebration of all things Annecy and the art, craft and industry of animation. Download your free digital copy of the June 2017 Special Print Edition of Animation World Magazine today!