Grab a café chair, order a double espresso, and enjoy AWN.com’s celebration of all things Annecy and the art, craft and industry of animation. With an ever-increasing number of big studio features, shorts and series; the incredible work of a diversity of indie producers; and the latest VR/AR and immersive media productions, the animation industry is more expansive and vibrant than ever. And, once again, creative director Marcel Jean and Mifa director Mickaël Marin have done a superlative job of bringing together a truly representative sampling of this creative abundance in one beautiful place, and ANIMATIONWorld Magazine is again proud to be an integral part of the celebration.

This special print edition, which is being distributed to attendees at Annecy 2018, celebrates the highly anticipated debut of Pixar’s Incredibles 2 with our cover story, where director Brad Bird discusses the making of the long-awaited sequel to his 2004 hit, which premieres at the Festival on June 15.

We also talk to director Genndy Tartakovsky about his return to helm the third entry in the wildly successful Hotel Transylvania franchise, and take an in-depth look at both Nina Paley’s highly personal biblical epic Seder-Masochism and Marc James Roels and Emma De Swaef’s anti-colonial epic This Magnificent Cake. Directors Liu Jian, Masaaki Yuasa, and Gary Wang talk about their latest features, while Joe Strike provides a rundown of all the feature films in competition. 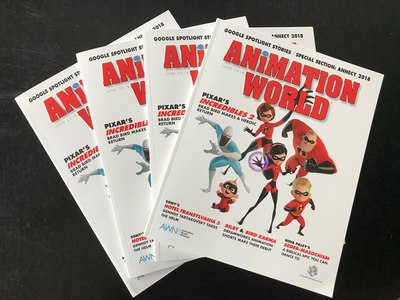 Animated TV series are big and only getting bigger, with many major studios continuing to expand their offerings. Our stories on DreamWorks Animation Television and Warner Bros. Animation offer insider looks at two of these. We also talk to British animator Julia Pott about her new Cartoon Network series, Summer Camp Island.

DreamWorks Animation also has a new short film program, and their first two productions, Bird Karma and Bilby, will open and close the festival. In our shorts coverage, we also preview some of the outstanding films in this year’s competition, talk to first-time director Domee Shi about her new Pixar short Bao, and interview the creators at Google Spotlight Stories about their latest VR projects, which will be showcased at the festival.

Grab a café chair, order a double espresso, and enjoy AWN.com’s celebration of all things Annecy and the art, craft and industry of animation. Download your free digital copy of the June 2018 Special Print Edition of ANIMATIONWorld Magazine today!