In 2020, Blender saw huge developments, both technically and creatively. There were no less than four releases, including one Long-Term Support release. On the Studio side, a new Open Movie called Sprite Fright was greenlit, and is currently in the early stages of production.

And this year, there are a bunch of other innovations coming up. Here, we share just a few.

This is a blockbuster project. By the time it’s matured, there will be whole new ways to create within Blender. As the name suggests, Everything Nodes allows you to use nodes to make almost all aspects of your projects, procedurally. Think of how nodes are currently used to craft shaders and materials, but then vastly expanded.

So… why should you want to make everything with nodes?

Well, this approach means that flexibility and granular control get a massive bump, ensuring that complex results are easier to generate and manage. Put another way: you reduce the time and effort needed to create even the most elaborate work.

The foundations for Everything Nodes are already in place. One example, available in 2.92: the new Geometry Nodes Modifier. As with everything in Everything Nodes, the geometry nodes modifier prioritizes real-world applications. For example, it speeds up set-dressing with the likes of pebble-scattering, flower and tree scattering, and more. See this recent post on the Blender Developers’ blog for more details.

Talking of real-world applications: Blender’s new Open Movie Sprite Fright is guiding initial targets for this project, with the creative team playing an active role in designing and testing Everything Nodes. So by the time you get your mouse on it, Everything Nodes will be focused on doing what artists need most.

One further implication. As its capacity increases, Everything Nodes will create the potential for entirely fresh add-ons. What will add-on developers make with these new superpowers?

That’s not a rhetorical question.

Because while this project is guided by Blender, its full potential will only be unleashed by the wider community. 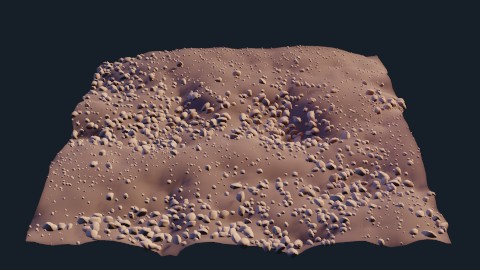 The Geometry Nodes Modifier, an early edition to the Everything Nodes project.

The long-awaited Asset Browser is a new editor window in Blender, allowing you to create and save asset libraries. It’s arranged into categories including scenes, animations, objects and collections, geometry, shading, images and sounds, and environment.

Advantages to you. First off, the Asset Browser makes content management in Blender easier. Standard shaders, node groups, textures, HDRI maps, and hair setups will become more straightforward to master and use

In 2021, the Video Sequence Editor will undergo significant improvements to meet the challenges of a production environment.

The base goal is to provide a great editing experience when working on a short film production. For example, assembling storyboards, animatics and video clips. It could also mean stitching together several hours of footage to create video tutorials.

To help with these use cases, the VSE’s design will be improved on a technical level, but also on the UI/UX side. This translates to performance improvements, with better caching and smooth video playback and scrubbing, interactive strip manipulation in the timeline, visual media transform, improved retiming tools, media management and three-point editing workflow, and more.

Check out the big picture at https://developer.blender.org/T78986 EEVEE’s first big goal is to incorporate Vulkan. With Vulkan, EEVEE will be both future proof and more efficient.

Other medium term goals for EEVEE include answering the question: “What does EEVEE need to be used in a feature film?” A part of the response is “motion blur,” which is why motion blur was prioritized in 2020. Another partial response is “depth of field,” which will be worked on next.

And on the horizon: the possibility of ray tracing. But let’s conquer Vulkan first. Nishita Sky, recently added to Blender is planned to be ported to EEVEE. The goal for 2021 is to make EEVEE an option for production level rendering.

The community has been passionate about getting more VR into Blender. Thanks to their hard work, VR development in Blender is proceeding rapidly along a series of milestones, including the addition of input devices (VR controllers) inside Blender.

In fact, you’ll soon be able to create whatever you want in Blender’s VR, way beyond simple walkthroughs. Put another way, VR will become a real option for creation within Blender. Blender 2.83 VR by Dedouze. Blender’s VR capabilities will be massively upgraded in 2021.

For 2021, efforts on Cycles will be directed at improving performance, especially in scenes brimming with meshes, hair and volume objects. GPU/CPU hybrid rendering will also be given care and attention. The aim is to make Cycles even more competitive in the crowded world of render engines.

Formerly called ‘Animation 2020’, but for prevailing reasons it could not start last year. The good news it that Blender Foundation received a big grant from AWS to invest in character animation tools the coming 3 years. We want to involve experienced character TDs from the industry (veteran Jason Schleifer is available), including recruiting top developers who are in for a challenge (recruitment starts Q2 ’21). Specs include work on speed (threading, prefetch, caching); Node system for drivers/constraints/deforms; character debugging tools; redesign armatures to work for mocap, controls and automated systems (muscles); multi-layer posing and allowing tweaks on top of caches; advanced interaction/selection (including widget-less posing, diagram views); and of course to be well aligned with USD. Let’s stop here!

Both Blender Institute and Blender Studio are working on pipeline development as part of the production of Sprite Fright, Blender’s new Open Movie. The aim of pipeline development is to help define how everyone works together, from director to art director to rigger. With greater collaboration comes greater efficiency, and more energy for creative work.

On a more granular level, the hot topics for pipeline development include improved overrides, automatic file building, and the integration of production management, render management and storage systems. This year, Pixar’s USD will be more fully integrated into Blender.

USD In Collaboration With The Industry

A simplified version of Pixar’s USD exporter was introduced in 2.82. For 2021, there are active efforts to introduce more extensive support for USD I/O. On the bf-usd mailing list, you can find active discussions on the topic. Follow the project on https://developer.blender.org/project/view/118/.

Of course, Blender’s ever-increasing toolkit doesn’t spring into being all by itself. It’s created by gifted minds, some in Amsterdam, and many more in the wider community.

It’s also supported by a whole team at Blender Headquarters. That team is currently expanding in order to help grow every aspect of Blender. As well as developers and artists, Blender is busy building its management, communications, and HR teams. Stay tuned for updates.