There may not be any other studio in the world quite like Animal Logic. Headquartered in Sydney, Australia with outposts in Vancouver and Los Angeles, the company produces feature animation for films such as Peter Rabbit and The LEGO Movie franchise, yet is also known for its high-end VFX work on features such as Guardians of the Galaxy Vol. 2 and Alien: Covenant.

“You’ve got an interesting mix of crew, technology, and creativity here which is quite unique,” Paul Butterworth, a VFX supervisor at Animal Logic’s Sydney studio, explains.

Continuing a long and collaborative relationship with Marvel, Animal Logic was invited by overall VFX supervisor, Chris Townsend, to be part of his visual effects team on Captain Marvel, the origin story of an iconic galactic heroine that has generated more than $1.1 billion at the global box office sincer debuting in theatres this past March 8. Animal Logic was given three key sequences on the film, including the chamber where Captain Marvel meets with the Supreme Intelligence; the Mission Briefing hologram where Yonn-Rogg outlines the plan to extract Soh-Larr from Torfa; and the treatment of the Mindfrack Memory sequence shots where the Skrulls are scanning through Carol’s memories.

Animal Logic helped develop a look in line with the tastes of directors Anna Boden and Ryan Fleck, going over various effects, environments, and iterations in cineSync video review. The Animal Logic team in Sydney could draw atop shots while connected in real-time with collaborators in Los Angeles, helping them define the creative vision for the effects while staying perfectly in tune with the client. 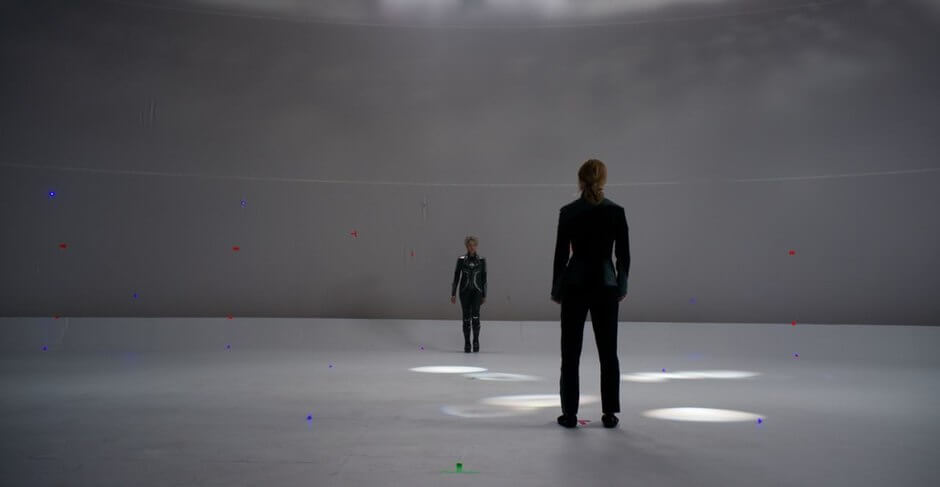 Captain Marvel is one of the most distinctive and diversely set films in the Marvel Cinematic Universe, spanning locations such as Los Angeles in 1995, the alien Kree planet of Hala, and a dreamlike space where Captain Marvel herself encounters the Supreme Intelligence. Constructing that space was Animal Logic’s chief project mandate. The filmed footage with actresses Brie Larson and Annette Bening had a lighting rig shining various beams in through the ceiling. Animal Logic initially planned to paint that out, but instead mapped the CG lighting routines to match the practical lighting for a more fluid result.

Boden and Fleck also wanted to take the scene much further than originally planned. “As we were on set, discussing it further with VFX supervisor Chris Townsend and the directors, Anna and Ryan, they all wanted to go with something more elaborate,” Butterworth shares. “We ended up rotoscoping off both Brie and Annette through every frame of that entire sequence. We separated them from the original background and then rebuilt the entire environment from scratch.”

Part of the challenge was creating the watery substance that the Supreme Intelligence (Bening) is formed from. It also had to form into other objects, which required the use of complex simulations to deliver the desired effect, a process Butterworth describes as “artistic, simulation sculptural work.”

Animal Logic also handled a sequence on a Kree spaceship that needed a holographic computer display placed between several filmed actors. The studio has delivered similar holographic effects on previous Marvel films, so it’s one of their specialties. However, it’s still a task that requires ample nuance: matching the familiar Kree aesthetic, ensuring that all actors’ eye-lines are matched to key items on the display, and not letting the effect overpower the shot. That’s where cineSync comes in for Animal Logic. The video review tool allows collaborators from anywhere in the world to meet up in a shared session, letting everyone draw and annotate frames in real-time. It’s how Animal Logic’s team of about 60 artists on the project began conceptualizing the effects that were used across the 315 Captain Marvel shots they handled.

“We usually start with quite a blank canvas, really,” Butterworth notes. “We fit in perfectly with the cineSync setup, because we were drawing and doodling into these shots and trying to solve the design on the fly. I love the real-time nature of cineSync sessions, even though the client is overseas.”

Animal Logic spends a lot of time in that design phase, taking what Butterworth calls a “scattergun approach” at first to try and hone in on what the filmmakers like and need. Once they can narrow down the direction, cineSync helps them collaborate with the client and begin conceptualizing that effect, whether it’s an environment, creature, holographic display, or something else entirely. Artists can simply draw atop a frame to express their ideas.

“If you ask anyone that I work with, I spend an enormous amount of time painting over the pictures,” Butterworth adds. “Most of the time, I’m doodling. cineSync is definitely one of those indispensable tools. We use it for pretty much everything.” Animal Logic is used to working remotely with international clients, and the time zone difference actually suits the Sydney team well when it comes to clients in Los Angeles. According to Butterworth, “We’re used to dealing with Los Angeles from Sydney. There’s a really nice break. By the time we’ve uploaded work from the night before, the clients have seen it. By the time they load a cineSync session, we’ve had our coffee and are good to go. It’s perfect timing for us.”

The team relies on cineSync to stay in close communication with clients, and Butterworth knows that best of all. He’s the person interacting directly with filmmakers, picking their brains to try and discover a shared vision for the work. Even if he can’t be in the same room with them throughout the process, it’s easy for him to fire up a cineSync session, and even have a Skype video call alongside to better read visual responses.

“cineSync is such a crucial tool in my job, because my job specifically is outward-facing from the company,” he states. “I find that the more time I can spend with the main VFX supervisor on the project, showing references, texts and explaining our thought processes – and then dig out of him or her what they’re thinking – the better it is.”

“For me, cineSync is the most valuable tool that I use,” Butterworth concludes. “For reviewing, for gauging the emotional reaction, for explaining where we are and where we’re going, it’s used on every level of developing a shot to final, really.”