It’s been a big week for Nike campaigns, with celebrations popping up online of a new Air Max range and the swoosh of its classic logo. While the swoosh isn’t celebrating any anniversaries this year, shoewear brand Footlocker decided to team up with agency One Hundred – and a whole host of cult animators – for a series of short loops inspired by the logo and classic Nike shoes like the Air Max 97.

Speaking of Air Maxes, the new 270 React range got a major push this week, with young western artists creating prints and matching variants of the shoe as based on modern art movements like Bauhaus. While those works got some buzz this week, there was a similar official project in Taiwan, with major Taipei art space Pon Ding working with local artists to do the same thing but to much, much better effect (and sadly less fanfare). 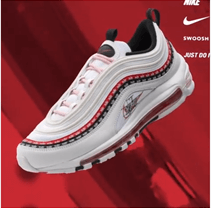