Various problems appeared in the Spring Festival in 2019, including the withdrawing of movies due to “technical problems”, the unusually high price of film tickets, and thefts of film copyrights.

Viewing from the box office, the score of 5.844 billion (the Spring Festival is from New Year’s Eve to the sixth day, the same below) is only 72 million yuan more than that in 2018, an increase of only 1.25%. In terms of the viewing people, the number of that in spring festivals in 2019 was 131 million, decreasing 9.7% from 2018. After box office surged in the past two Spring Festivals, it calms down in the 2019 Spring Festival.

At the same time, the film of 8 box-offices with a box office of more than 100 million yuan made the entire schedule seem very crowded. The competition between the head films is extremely fierce, and the driving effect of word-of-mouth on the box office has become more apparent.

Why is this happening in the 2019 Spring Festival, and what impact will this have on the future?

The Film Ticket Prices Have Risen, while the Box Office Did not Achieve the Anticipated Performances.

“The ticket price is too high. A ticket should cost 80 yuan, which is twice as high as that in previous years,” said Colleague Y who lives in a county town in North China. “I used to watch two or three movies during the Spring Festivals, but I didn’t see any film this year.”

Besides Colleague Y, many people are complaining about the ticket prices after returning to the 3rd, 4th and 5th-tier cities, which is shown in thier Moments of WeChat.

The ticket prices in first- and fifth-tier cities have risen by more than 10%, with second-tier cities ranking first with 13.25%.

People in the first and second-tier cities can still put up with the rising ticket prices, shown by the rising box office. However, audiences in third to fifth-tier cities could barely stand the excessively high prices. In particular, the number of audience in the fourth- and fifth-tier cities dropped by 4 million and 1.8 million respectively, the decline rate being around 12%. It can be seen that although audiences in most areas have developed a movie- viewing habit, their reactions to prices vary due to different economic conditions. This is the reason why the number of viewing people declined most rapidly in the fourth- and fifth-tier cities though ticket prices there were relatively low.

As we all know, the development of the Chinese film market in recent years is inseparable from the trend of “consumption sinking”. The young people in the town have long been a force to be reckoned with in film and television consumption. But at the same time, as of 2017, 44% of China’s counties have only 0 or 1 cinema, of which 350 counties have no cinemas and 912 counties have only one cinema. Too little infrastructure led to excessive prices and many potential viewers were excluded from the theater.

We are not opposed to the price increase during the Spring Festival. After all, due to the sudden increase in demand for viewing during the Spring Festival, price increases are also normal market behavior. However, the market behavior must be thoroughly implemented. At the same time as adjusting the platoon, if the theater can adjust the fare according to the market supply and demand relationship, it can be adjusted during different periods of the holiday (the first one can be slightly higher) and between holidays and non-holidays. The fare is a more reasonable response.

The stagnation of the box office does not indicate the arrival of the bottleneck of the Spring Festival, but for the non-head film of this year’s Spring Festival, this total is “catastrophic.” Although several films were evacuated for various reasons, the Spring Festival in 2019 still gathered eight unique films. Science fiction, comedy, fantasy, animation, and vigilance all have their own representatives. This Spring Festival can be described as a hundred flowers.

But the box office cake did not grow much, and the number of people who split the cake suddenly increased, so we can clearly see the final result. 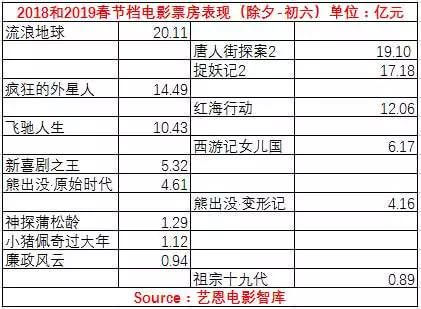 It is possible to clearly see the corresponding relationship in the above picture. The number of movies in the two-year Spring Festival stalls at 500 million and 1 billion, and the total box office of these movies are roughly the same. Only in the movie of about 100 million yuan, there are 3 in 2019, and only 1 in 2018. It can be said that this crowded Spring Festival schedule is not a head movie.

More importantly, word of mouth decided that the trend of box office became more and more extreme in 2019. “Wandering Earth” was only ranked fourth in the opening of the first day, and it became the day of the day in the third day of the third day. On the fourth day of the New Year, it was the first place in the cumulative box office. In the Spring Festival last year, the total box office of “Red Sea Action” exceeded “Chinatown Detective 2” but it took 23 days.

There are more choices for the audience, and you have to be extraordinary when you want to stand out. The difficulty of a movie wanting to make the “Wandering Earth” and “Red Sea Action” can be imagined. However, from the current situation, most movies can enter the “500 million clubs” as long as they can enter the TOP5 of the Spring Festival, thus obtaining a good market result. This kind of reality will also attract more movies to look at the Spring Festival. After all, although everyone does not have the confidence to “receive the king”, but there is a “closed Hou” enthusiasm, although for most movies, the final result of the Spring Festival It is only a normal box office with 100 million yuan.

The ticket has been replenished, and piracy is coming. How much influence will the “outside factors” have?

In addition to the quality of the film itself, some off-site factors cannot be ignored.

With the adjustment of the ticketing website and the film side, the rapid reduction of the 2019 Spring Festival ticket has become an indisputable fact. Most of the “19.9 yuan” movie tickets are limited to the day of the New Year’s Day, and the number is very poor. Many viewers have the experience of “spot invoicing, but seeing a full-price ticket”. It is no less difficult to grab a ticket to buy a ticket than to catch a train ticket during the Spring Festival.

In fact, as early as September 2018, the rumors that the relevant departments were about to stop the ticket were revealed. After that, although “19.9 yuan” was not extinct in the market, the number did decrease. The viewers’ viewing habits have been cultivated, and the motivation for the ticketing of the producers and online ticketing platforms has been greatly reduced.

In the past few years, most of the film has been plunged into the “Prisoner’s Dilemma”, which has led to the emergence of a larger area of ​​the ticket (when everyone makes up for it, “complement” is the best plan for everyone) . It can be said that although the reduction of ticket replenishment will affect the box office in the short term, in the long run, it is the only way for the market to mature.

If it is said that the reduction of the votes is still “shadowing the people”, the emergence of piracy is a major damage to the interests of the film and the order of the entire market. Almost from the beginning of the New Year’s Day, “1 yuan viewing” even free links have appeared on the Internet. The problem of piracy has always been a chronic illness in the domestic film market, and the gun version can often be seen on the Internet on the day of the release.

However, this year’s “HD piracy” made everyone realize that the loss of source file leakage will only be greater than the gun version. According to Gunge, the producer of “Wandering Earth”, all the Spring Festival movies may have more than 20 million views on the Internet. For these movies, this means a box office loss of 800-900 million yuan. 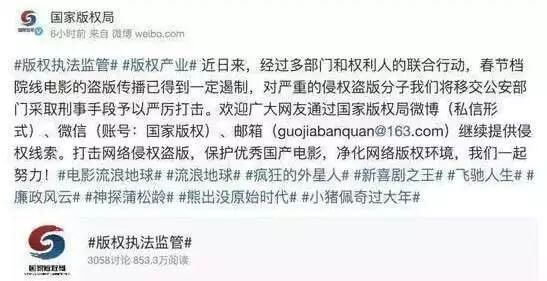 Purification of the market should start from the source.

The assemblage and withdrawal of movies, the soaring prices of film tickets, the pirated editions…

The 2019 Spring Festival movie season is as dramatic as those released films.

The problems still exist, waiting for us to solve; the progress is obvious, in need of consolidation. The Spring Festival is the beginning of the year. I believe that Chinese films in the Year of the Pig will not stop advancing because of the bad performances in the Spring Festival.